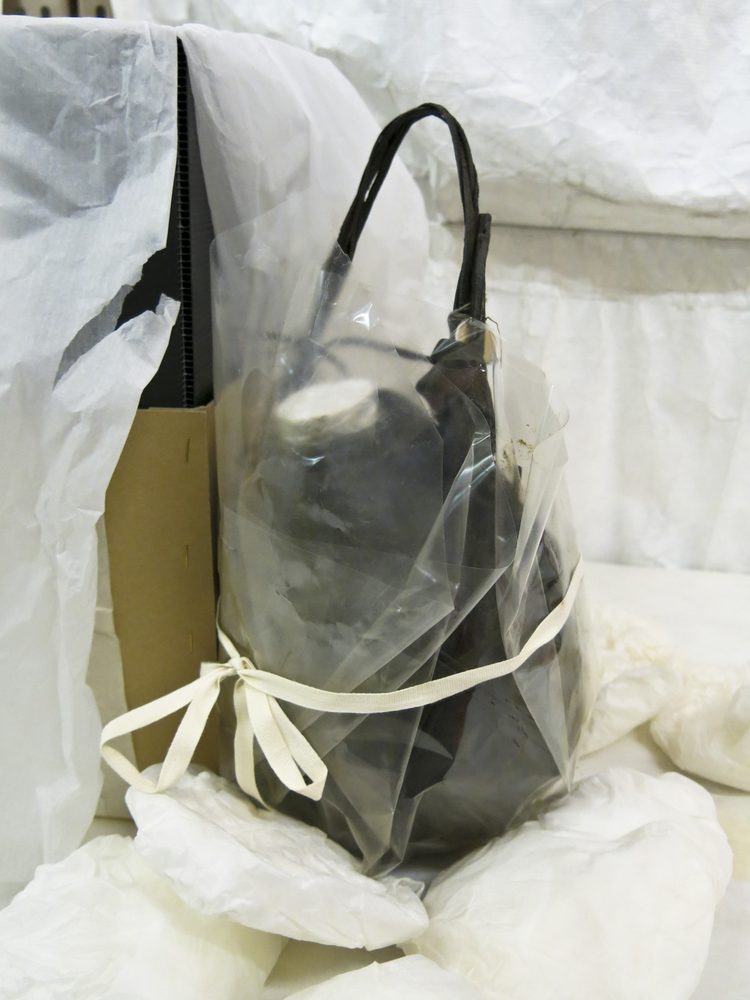 Gourd for oil and grease ("ming-ombril" ). Egg-shaped gourd with opening in pointed end. In cradle of cane with cane handle. The specimen has been broken and is plugged with resin in one side. It is encrusted with soot because it has been hung in the rafters above the fire. Used for carrying and storing "kopong nde", a tree oil or pig grease both of which are used as a cosmetics

Cosmetic Tree-Oil Container, Ming Ombil, Mt. Hagen Region, Papua New Guinea. This gourd vessel in a basketry cradle of split bamboo is still saturated with the oil it served to contain. Made by the people of Mt. Hagen in the western highlands of Papua New Guinea, this ming ombil (as they are known) formerly contained resinous tree oil, traded into the highlands from the low-lying forests to the south. In many Highlands societies, such tree oil is an important cosmetic, and both men and women oil their bodies, faces and garments for major social occasions. Lustrous, shining skin is viewed as a sign of strength and fertility by New Guinea Highlanders, and so oiling the skin was an important part of smartening up for special occasions. Such oil was an expensive import, bought in at the cost of several pigs, and transferred into containers like this from the stoppered bamboo tubes it travelled in. Gourd, bamboo, vegetable oil. Collected in 1965 by Professor Andrew Strathern and Professor Marilyn Strathern.