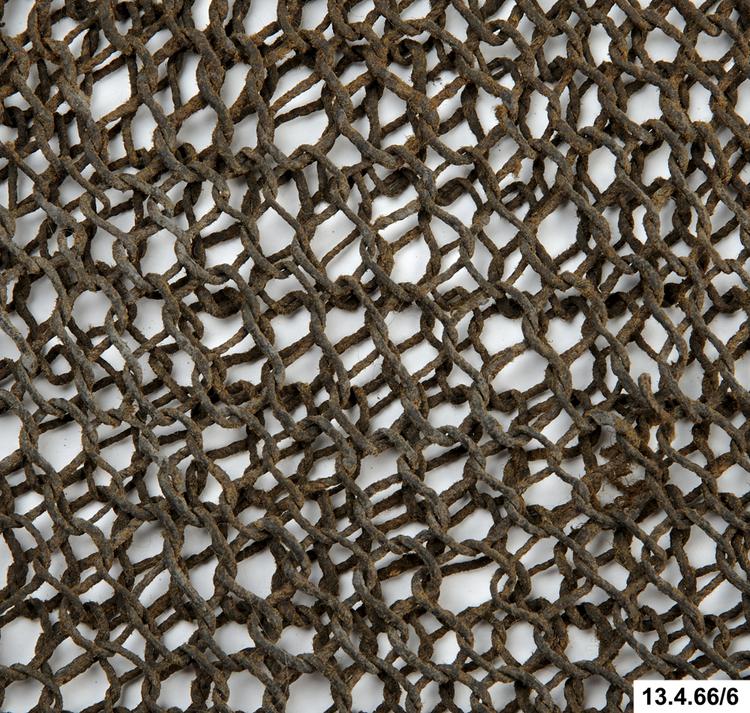 Woman’s Dress Bag, Wal Kupin, Mt. Hagen, Western Highlands, Papua New Guinea. Mt. Hagen women wear string net bags of rolled, dyed and oiled bark string, with the strap across their foreheads and the bag itself covering their upper backs. As Western Highlanders generally understand the sheen of oil to beautify things, the black, oiled appearance of a well-maintained wal kupin is highly valued. Wal Kupin are bags worn as short, hooded capes on special occasions by unmarried and recently-married girls. A finely finger-woven wal kupin is made for each Hagen bride by one of her female relatives, and when the bride receives her bridewealth from the groom’s family, she then passes some of this on to the weaver in thanks. This can be an important source of income for a skilled weaver, and ensures that every Hagen bride starts married life in the house of her husband’s people with a powerful symbol of the status and care of her own family. Sometimes a bride will give the wal kupin to her new sister-in-law as a symbol of making a sisterly bond between the two families. The wal kupin is woven with a pair of tassels, and the bride cuts these off after marriage, giving them to her husband to wear as a pubic covering. In this way, although the wife moves to become part of her new husband’s household, the wal kupin from her own womenfolk allows her the means to symbolically encompass and protect his sexuality and fertility as hers. The wal kupin is an important part of a woman’s dowry, and her husband is expected to acknowledge it with a gift of pork or live pigs to his in-laws. Bark fibres, pigment. Collected in 1965 by Professor Andrew Strathern and Professor Marilyn Strathern.