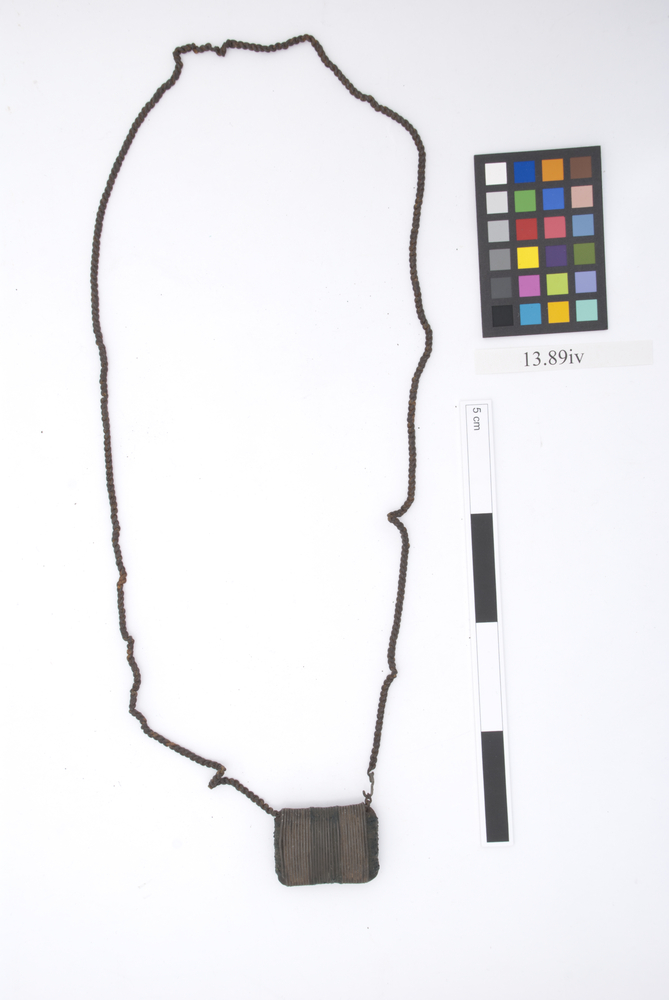 Charm, part of a set for head, neck and wrist, consisting of a long iron chain suspending a rectangular pendant covered in metal wire.

Community Commentary by Juma Ondeng' within research project: 'Rethinking Relationships and Building Trust around African Collections' 2021 Giriama people are part of the Mijikenda group found along the coastal region of Kenya. In pre-colonial and colonial era, and to some extent to this day, there is widespread belief in sorcery and charms. The society developed means and ways of protecting their people against sorcery and witchcraft through protective charms. However, the colonial administration through the enactment of Witchcraft Act of 1925 banned many of the traditional methods of self-protection through the use of charms. Witchcraft in Giriama community is a preserve of the elderly men, and it has always been a widespread belief that neighbours and potentially every elderly person can be a sorcerer. Thus the use of protective charms was common during the colonial and precolonial era and still persists to date. In cases where these protective charms failed to work and a sorcerer was suspected for causing misfortune, the Giriama had ways of forcing confession through coercion including use of hot axes, or rocks placed on palms of hands of the suspects, hot needles tucked in the upper lips and bread treated in a particular way to lock the throat of the suspect. The threats to submit to these tests often coarse the victims into submission and confession after which traditional medicine was used to cleansed them. The charms placed in metallic casings is a strong evidence of Swahili and Arabic influence within the Mijikenda community. As a community, they believe that they acquired witchcraft and charms through interaction with Kamba, Arab and Swahili ethnic groups. Charms as protective adornments ensures social stability and gives the wearers confident and feeling of safety as they go about their day to day activities. As a community close to the sea, they believe in sea spirits from the Swahili ethnic groups called mapepo which can be malevolent and charms are used to protect against such. Further research and evidence of correspondence between Horniman Museum and whoever donated these to the museum is necessary in order to determine the full provenance of these objects. Since the colonial government banned the practice of witchcraft in 1925, and struggled to controlled it in years preceding the enactment of the act, there are possibilities of such objects being forcefully confiscated by the colonial administrators who then gave them out to museums in the UK as illustrated in the case above. The Giriama has been lucky to have received back their looted Vigango, funerary posts which were sold to art dealers in the USA. Plans are ongoing to construct a cultural centre where all the returned objects will be kept and displayed. Therefore, once these charms are properly researched, the community will be happy to receive and keep them in their centre.