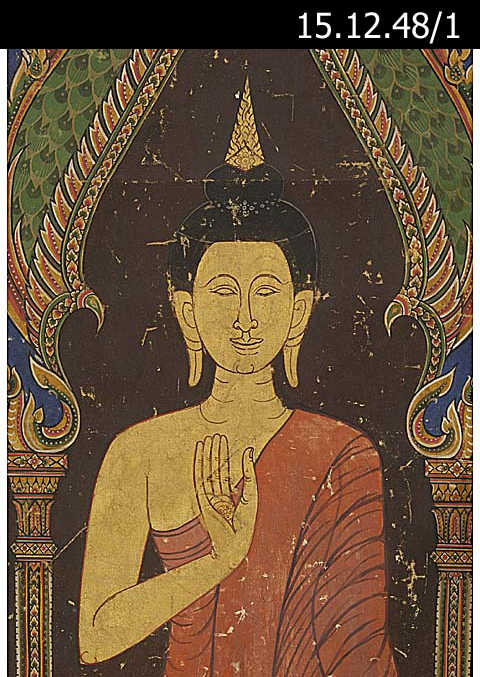 Scroll painting on cloth depicting a standing Buddha on a lotus between two standing disciples, Sariputta and Moggallana, in brown robes, against a black background. There are two apsaras above, one at each side, set againt a blue background. The Buddha stands below an upward-pointing arch, with the disciples under lower arches. Below the three figures an offering stand is depicted, with two worshippers seated, one at either side, and offerings in containers on the stand. The painting has wooden suspension bars.
An inscription at the lower edge in Tai translates as: 'This monument was built (or this thing was made) by Nang Plien as a memento to the Buddha. I pray to be reborn during the time of Sriariya (to come 5000 years after Buddha) and to enter nirvana during that period. If I cannot enter nirvana then I ask to be reborn in a good family so that I may be well and happy.'

Inscription in Tai is translated as follows: This monument was built (or this thing was made) by Nang Plien as a memento to the Buddha. I pray to be reborn during the time of Sriariya (to come 5000 years after Buddha) and to enter nirvana during that period. If I cannot enter nirvana then I ask to be reborn in a good family so that I may be well and happy.