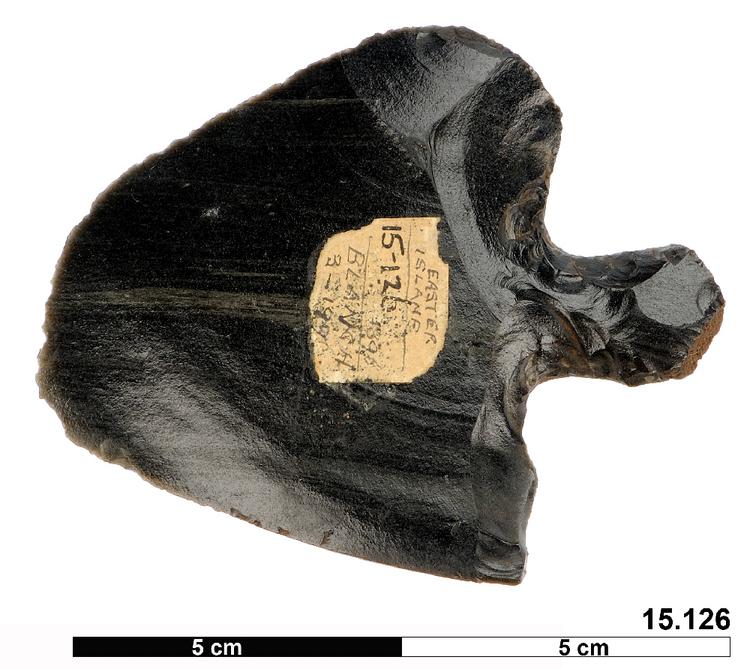 Tanged spearhead of knapped obsidian from one of three quarries on the southwestern tip of Easter Island.

Obsidian Spearhead, Mataa, Rapa Nui (Easter Island), Eastern Polynesia. It was only in the 1970s that any substantial studies were made of obsidian (black volcanic glass) use on Rapa Nui (Easter Island). Three obsidian quarries have been identified near the island’s south-western tip and the famous Rano Kau stone quarry where many of the moai (colossal stone figures) were cut. Obsidian use seems to have been almost abandoned by the time of sustained European contact in the late 18th century, but the material’s mining and use in making blades went on there for several centuries, reaching a peak in the 15th and 17th centuries AD. At the time that this object was collected, abandoned and half-finished blades could be picked up off the floor of these quarry sites. As a type of natural glass, obsidian takes an incredibly sharp edge when fragmented, and was particularly favoured by the Rapa Nui for the making of broad-bladed and tanged spearheads such as this example. Termed a mataa, this tanged obsidian spearhead has few parallels, as flaked glassy tools were extremely rare in Polynesia – and rarely found in the whole Pacific region outside of northern Papua New Guinea and the Bismarck Archipelago. Providing one of many cultural parallels between the inhabitants of New Zealand and those of eastern Polynesia, however, the Moriori of the Chatham Islands in the far southern Pacific also manufactured flaked spearheads of flint, which they termed mata. The blade takes its distinctive broadly arched form because the stone-worker was avoiding re-touching the edge (i.e. striking it again), which would blunt it; because of that, only the tang allowing the head to be bound onto its shaft differs in shape from the way it cleaved away from the original slab. Obsidian. Circa 1400-1700 AD. Collected on Rapa Nui in 1895 by an unidentified crewmember of HMS Blanche, and sold to the Horniman Museum in 1915 by Mr E. Lovett.