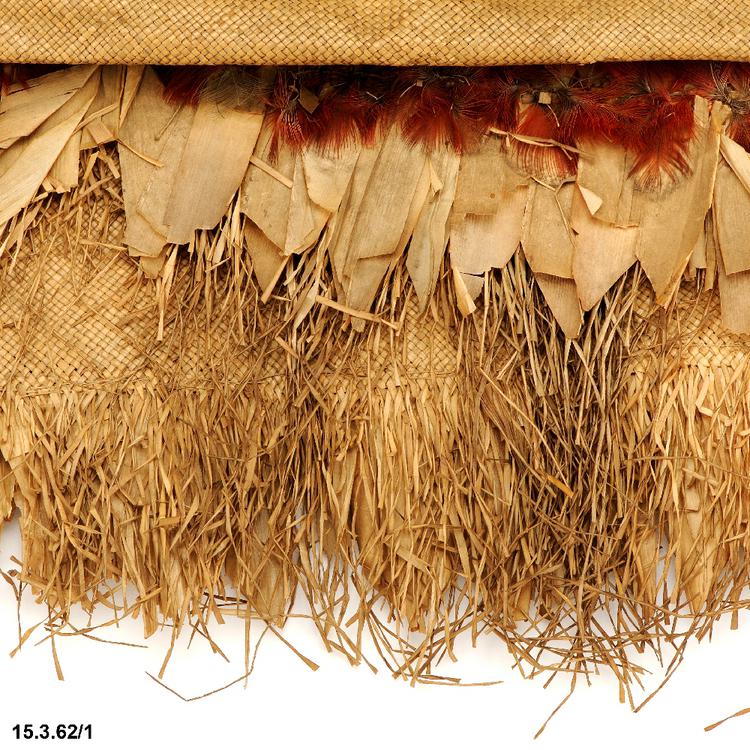 Samoan fine mat to be worn on formal occasions. This mat of densely woven pandanus leaf is trimmed with red feathers and has a fringe of both broad strips and fine roughened edges. The roughness of some edges is a mark of the mat’s prestige.

Fine Mat, ‘Ie Toga, Republic of Samoa, Western Polynesia. In Samoa, mats such as this example were woven by hand from a small range of different plants, and fulfilled a number of different needs. Coarse polavai mats were laid upon the hard gravel floor of the traditional Samoan house, and then covered with finer papa mats to provide a warm, clean, soft and smooth surface for walking, sitting and sleeping. Still finer fala mats of various styles are used as bedding, room dividers and so on. In this way, the texture of the whole domestic world in Western Polynesia is dominated by the patterns of flat weaving. Finely woven mats are also worn as garments across a vast swathe of Micronesia and Western Polynesia, but Samoa represents one of the most easterly manifestations. These wearable over-mats were worn on special occasions like belts, over a barkcloth skirt. They were also among the most valuable of trade commodities in the region. The name of this kind of clothing mat, ‘ie toga, tells us two important facts: Firstly, ‘ie tells us the name of the plant that it is made from: Pandanus tectorius. There are numerous different varieties of Pandanus used for mat-making, but the ‘ie has the softest, finest and palest leaves. These leaves have their thorny edge removed and are deftly split into strips of equal width. Pandanus leaves have a shiny upper side to shed the rain and a matte underside, and so the women submerge these strips in the sea for three days to separate the two layers. Only the shiny strips are reserved, and this immersion in salt water also has the added benefit of bleaching the leaves to a pale cream colour. The second half of the mat’s name, toga tells us that it was viewed by the Samoans as being a Tongan mat. In neighbouring Tonga, peculiarly, these mats are called kie ha‘amoa (‘Samoan fine mats’). This tells us that it was the foreign-ness of these mats that made them precious, rather than any particular way that they were made. This exotic value of the mat in both countries was emphasised by the fringe of precious red feathers that many have. Although this mid-20th Century ‘ie toga is decorated with chicken feathers that have been bleached and dyed red, in the 18th and 19th Centuries, these red feathers would have been the breast feathers of the Fijian kula parrot (Collared Lory, Phygis solitarius). Pandanus leaf strips and tabs, dyed poultry feathers. Mid-20th Century. Formerly in the private collection of a Mrs Swanzy.