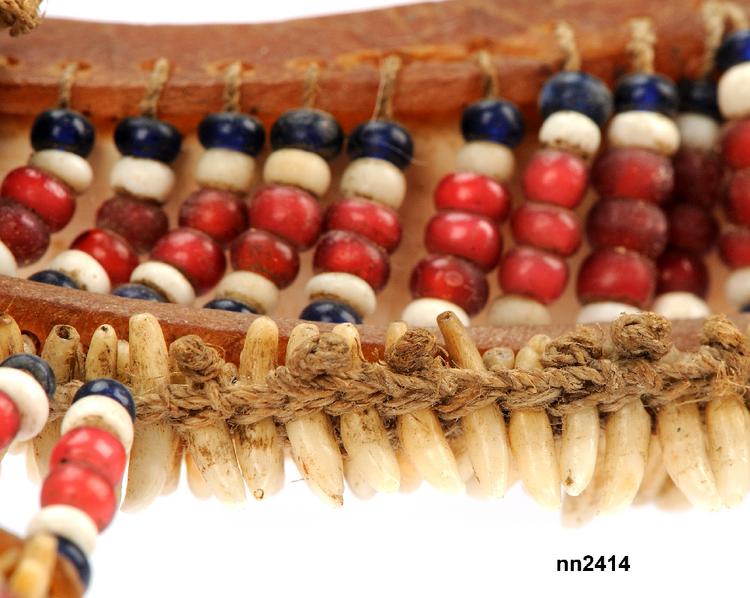 Shell ring money (bakia) made up as a breast ornament with rodent's teeth, glass beads, and turtleshell.

Giant Clam Shell Money Ring, Bakia, Solomon Islands, Central Melanesia. The value of bakia shell money rings was due to the work involved in making them. Although the central ring looks and feels much like a heavy piece of fine yellow-white marble, it is cut from the shell of a Giant Clam (Tridacna gigas). The rings were traditionally cut in a remarkable way: having drilled a hole in the shell to insert it, the maker used a loop of coarse plant fibre just like a hack-saw, in conjunction with abrasive sand and water, to cut first the outside ring, and then the inside ring. Then they ground the ring with polishing stones, sharkskin and abrasive leaves for many hours to create a perfectly circular and flawless ring with no trace of the shell’s outer surface. Bakia currency rings are fundamentally the same as the tiny shell rings produced by the hundred and strung on cords to form less valuable currency units. Rings like this were mounted for wearing by a senior male, and incorporate decorative attachments of rats’ teeth and glass trade beads, fixed to a large plate of turtleshell (Eretmochelys imbricata). Like other Solomon Islands money forms, they were used to buy goods, pay bride-wealth, accumulate savings, give gifts, pay for various kinds of service, and make ceremonial presentations to the spirits of the dead. At various times and places in the 19th Century Solomons, the equivalent value of a bakia was estimated at 1,000 coconuts, a full bride-price, the best pig you might find, a young male slave, or a warrior’s skull taken in a headhunting raid. Shell, turtleshell, teeth, glass beads, vegetable fibre. Early 20th Century. Formerly in the private collection of Mr W. Fowler.