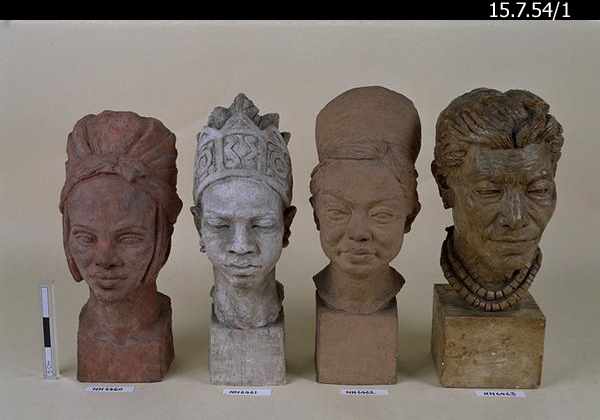 Portrait bust of Nihu, a retired head interpreter of Angami Naga ethnicity, from Kohima in the Naga Hills, aged 68 at the time he sat for the artist. He wears a double necklace of squared off beads and his hair is swept back from his forehead.

Nihu Angami (b.1870) was head dobashi (interpreter) for the British District Administrator in in Kohima, Naga Hills (now Nagaland), Northeast India. The dobashis mediated between the British and the Nagas, and had judicial responsibility for customary law. Nihu was well known to anthropologists and administrators like J.H Hutton, J.P. Mills and Henry Balfour of the Pitt Rivers Museum. He was much liked as a trusted advisor and reliable guide as well as a skilled negotiator and wise judge. As one of the founders of the Naga Club – a group established by educated and influential Nagas to speak on behalf of the Naga people – he was an important political figure and an early advocate for Naga autonomy from the rest of India. Nihu was 68 and retired when he sat for Milward. She wrote this about him in Artist in Unknown India her 1948 account of her travels: “My best model was Nihu, an Angami from Kohima Settlement, who had worked for the British for twenty years, a grand old man. He posed so rigidly and so well that he made me ache in sympathy. Unfortunately he got fever and the work had to stop for a time; this was disastrous for my sculpture, for when I have once had to stop I can never get back the same enthusiasm”.