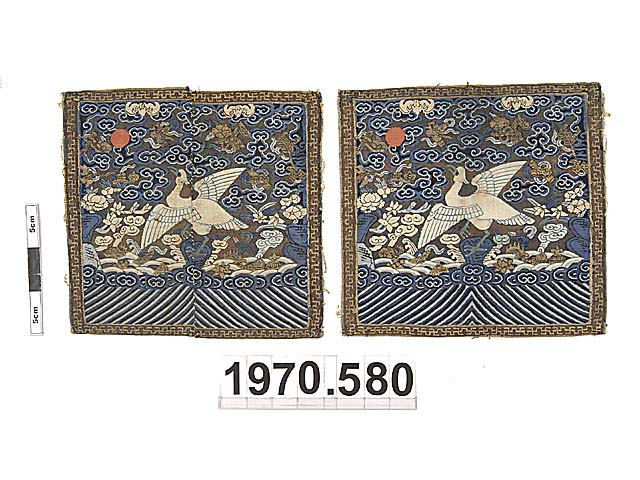 A mandarin square, or rank badge, buzi, made of silk and woven in tapestry or kesi' (k'o-ssu) technique. It is made in two equal sized sections and sewn together along one selvedge, and would have been sewn to the front of a court surcoat It depicts an emblem of rank of a civil official: the egret, for an official of the sixth rank. The bird, woven predominantly in white, has the feathers of its outstretched wings and tail outlined in blue and blue legs and beak. It is is standing on a rock, looking upwards towards a red sun in the top left hand corner. It is surrounded on a brown ground by clouds in tones of blue, and placed symmetrically at the top are two white bats. Further augeries of good fortune include a fan, fish and a conch. The sea is depicted using converging diagonal lines. The imagery is framed with a swastika patterned border, worked in brown silk and metal-wrapped thread. The square is lined with light blue tabby woven silk. [Textile]