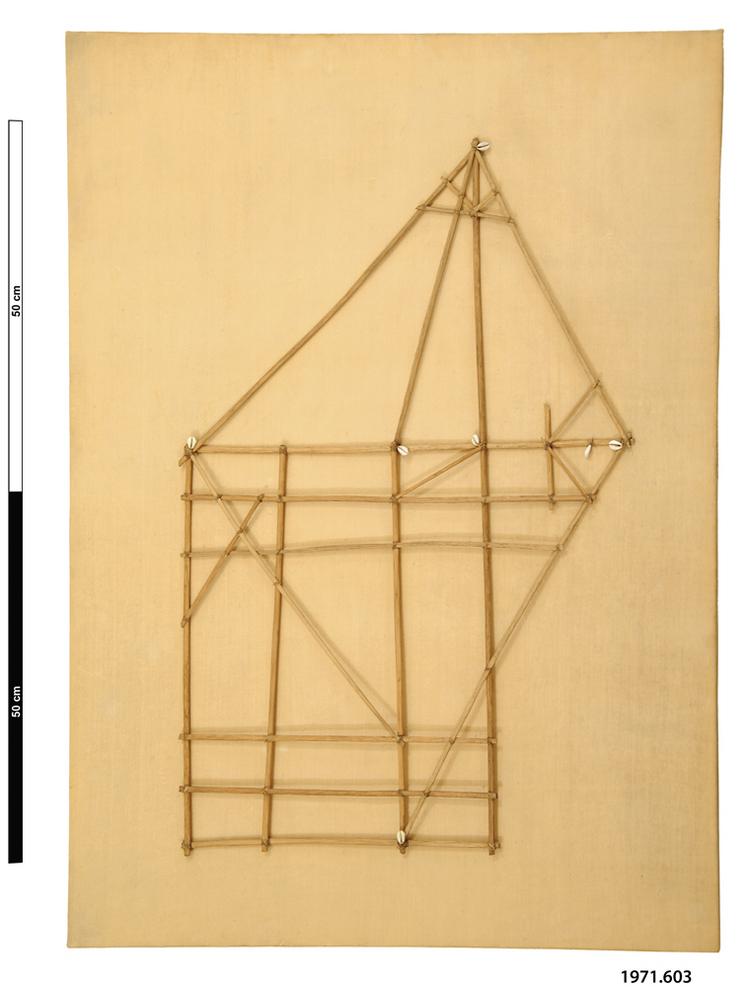 Navigational chart depicting ocean currents and prevailing winds through a rectilinear grid of split strips of coconut leaf midrib, to which are tied small white cowrie shells marking the location of islands. This can be differentiated from the replica 8.2.57/2 by the fact that the other uses volute shells, and this cowries. They represent different parts of the ocean.

Navigational Chart, Rebbilib, Marshall Islands, Central Micronesia The rebbilib maps of the Marshall Islanders are strange and marvellous things. For those of us who rely on systems of letters and numbers, latitude and longitude, GPS and SATNAV to know where we are, they are unreadable. We take for granted our necessary prior knowledge of how to use our modern navigational devices, but when we look at the rebbilib, we are like infants again. The chart’s coconut wood rods represent the prevailing oceanic currents, and the nodes where they join, that are marked with little cowrie shells, show the location of islands or island groups. Currents are the only permanent features in the featureless expanse of the open Pacific Ocean, and by knowing the direction of these currents, the Marshall Islands navigator could deduce their likely position, and therefore set a course. To do this, it was necessary for them to be able to read the position of the sun and stars and know the compass points, but this was basic knowledge acquired in childhood by all Pacific Islanders. By sailing ‘downstream’ or ‘upstream’ on these currents, the Micronesian navigator could find their way across vast expanses of empty ocean. Over thousands of years, the ancient ancestors of the Pacific Islanders developed a number of other remarkable skills that made such vast undertakings possible: in several island groups, sailors had developed the ability to examine the shape of waves in the open ocean, and work out (from their shape alone) the direction of any land, or very shallow water, within 50km or so. Even more amazingly, some Polynesian sailors were able to put their hands in the sea, or taste the seawater, and know, from its texture and flavour alone, which region of the ocean they were in. Coconut wood, coconut leaf fibres, cowrie shells. Late 19th Century. Formerly in the collection of the Commonwealth Institute and transferred to the Horniman Museum with other ethnographic specimens in 1971.