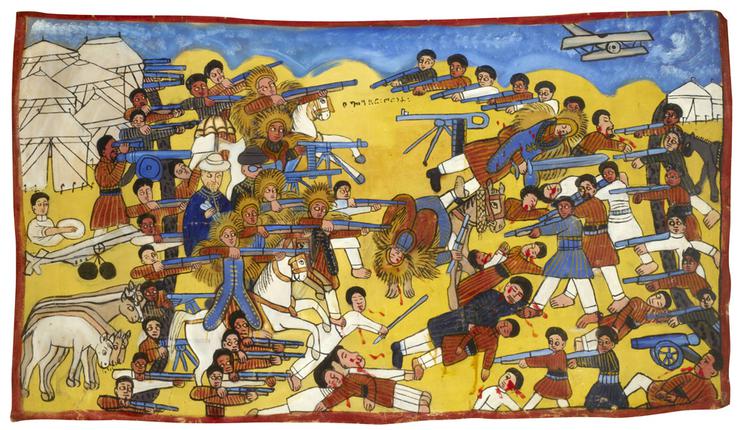 Painting on cotton depicting the Battle of Anchem (Gondär) fought on 31 March 1930. To the left are the tents and armies of Ras Mulageta Yeggazu, Minister of War and Commander-in-Chief of the Imperial army. The Ras is shown wearing a hat, surrounded by his advancing troops. To the right the battle is lost, with Ras Gugsa Wale already fallen. To the centre left and top right are depictions of two planes, the first time Ethiopian military aircraft were used in battle.

The Battle of Anchem was the first time that both psychological and aerial warfare were used in Ethiopia. Biplanes were used initially to drop leaflets on the advancing armies of Ras Gugsa Wale. One leaflet signed by the Abune (head of the Ethiopian Orthodox Church) excommunicated anyone who fought alongside the Ras. A second leaflet written by Empress Zauditu and Negus Tafari Makonnen declared the Ras and all those who fought with him as rebels. The second time the biplanes flew over the armies of Ras Gugsa Wale they dropped bombs, causing many soldiers to desert.