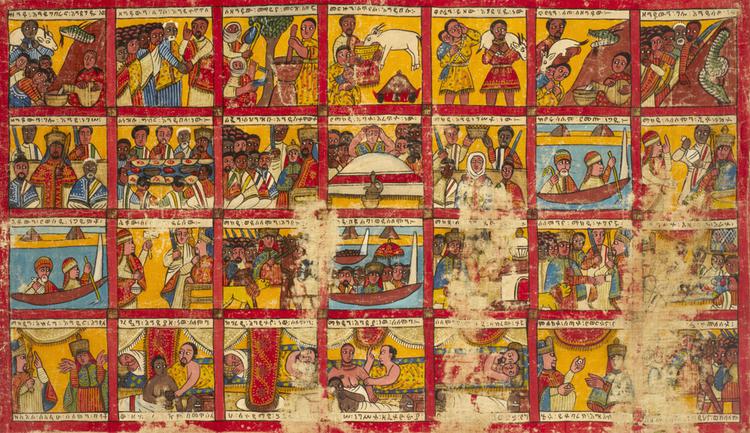 Painting on cotton depicting scenes from the story of Solomon and Sheba. The first register of cartoons shows how Ethiopia was terrorised by a serpent called Wainaba, who had to be appeased with a sacrifice every time the people wanted to collect water. One man, Angabo, was determined to free Ethiopia from the serpent's tyranny. He collected poison which he mixed with grain and fed to the sacrificial goat, poisoning the serpent. Angabo killed the serpent and was proclaimed King of Ethiopia. After his death his daughter Sheba, or Makeda as she is known in Ethiopia, was crowned Queen.

The second register shows the coronation of Makeda and how the Queen's chief merchant Tamrid received news that King Solomon sought sapphires and gold for the building of the Temple at Jerusalem. The news is represented as a letter held in a forked stick. Tamrid was sent by the Queen to fulfil Solomon's request and when he returned to Ethiopia his tales of the great Temple and the wisdom of King Solomon convinced Sheba to travel to Jerusalem to see this great king herself.

The third register shows Makeda travelling to Jerusalem. When she arrived in Jerusalem she was received with great ceremony by Solomon. On the night before she returned to Ethiopia, Solomon held a great banquet in her honour. He asked that she sleep in the King's quarters that night, but, afraid the King might try to seduce her, she begged him to swear by God not to touch her. Solomon answered saying, 'I swear unto thee that I will not take thee by force, but thou must swear unto me that thou wilt not take by force anything that is in my house'. The Queen readily agreed.

The fourth register shows that after the spiced food of the banquet Sheba awoke in the night very thirsty and, reaching for some water, she was seized by Solomon. Shocked, she asked, 'Is the oath broken by my drinking water?' Solomon replied, 'Is there anything that thou hast seen under the heavens that is better than water?' The Queen agreed and Solomon was freed from his oath. Queen Sheba returned to Ethiopia carrying Solomon's child. At their parting Solomon gave the Queen a ring containing his royal seal.

The painting illustrates scenes from the story of King Solomon and Queen Sheba. The story is central to the ancient Ethiopian book, the 'Kebra Negast' or 'Glory of the Kings'. The book has been described as a repository of Ethiopian national and religious understanding. It is an account written in Ge'ez (the ecclesiastic language of the Ethiopian Orthodox Church) of the origins of the Solomonic line of Ethiopian emperors and explains how the Ark of the Covenant came to Ethiopia. This is understood as historical fact by many Ethiopian Christians and Rastafarians.