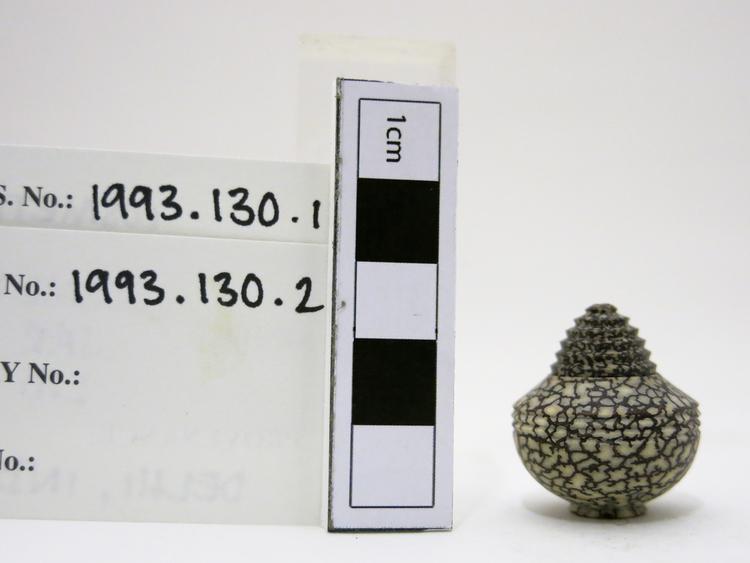 Small cosmetic jars with lids, such as this one which measures just 19mm by 26mm, could fit into pockets and be carried about on the person and were, therefore, very practical for storing cosmetic powders or beauty creams. These jars are 20th century examples from India. The patina is interesting with the crazed pattern coming from the natural colouring of the Areca nut--the material the jar is made from. Areca nuts are also commonly referred to as the betel nut, and they are found across Southeast Asia and South Asia, the Pacific and East Africa. In these parts of the world, the nut is often chewed--and then spat out--for its mild psychoactive properties, and it leaves red stains on the teeth. This jar was collected by Natalie Tolbert on behalf of the Museum in the mid-1990s. She was a medical anthropologist and lecturer, and she worked as assistant curator at the Horniman from the early to mid-1990s. Tolbert made a number of collecting field trips to Africa, Asia, and the Americas, including the countries of Egypt, Sudan and the United States, respectively. In the United States, in particular, she collected Pueblo pottery. She also made a South India pilgrimage collection during a visit to India from November 1994 to January 1995, sponsored by the Nehru Trust. The objects collected were later used in a temporary exhibition at the Horniman, ‘Sacred Lands: Devoted Lives. Hinduism and Daily Life in South India’.