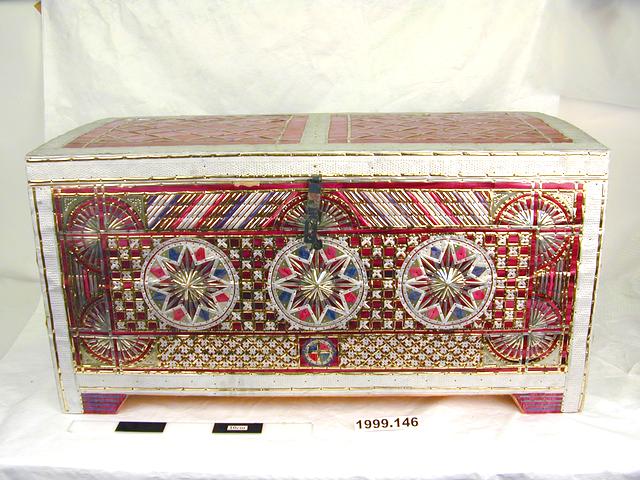 Dowry chest made of machine-cut, untreated, pine boards with butted corners, four raised legs and a metal-hinged lid. It is ornately decorated with metal strips, secured with nails and arranged to create a series of symmetric geometric patterns that are coloured grey, gold, silver, and red. The front panel has a rectangular panel of a series of small squares, alternately filled with a criss-cross within which are three large circles, in the centre of which are raised, eight pointed stars. Above the centre star is semi-circle with radiating strips and bordered by linear strips angled in towards the semi-circle. Each of the four corners has a three-quarters completed circle with radiating strips. The bottom border is a series of criss-crossed strips. The side panels have strips of metal used to create a large square, the interior of which is filled with a criss-cross pattern. The side and bottom edge of the front and side panels have a broad strip of punched tin, within which the larger designs are contained.

The edges of the lid are similarly decorated with a punched tin strip. The top of the lid has strips of metal used to create a two large squares, the interior of which are filled with a criss-cross pattern and edged on all four sides with punched tin borders. The background of the metal cover lid is coloured red. The back panel is undecorated but painted green. A thin metal handle is attached to each side panel and a tongued lock attached to the front of the trunk.