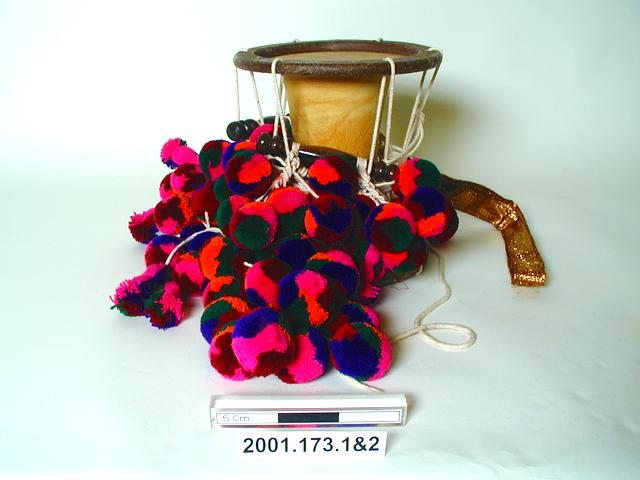 Edaykka hourglass shaped double membrane drum: drum body (edaykka kutti) made from jak (jack) wood (Artocarpus heterophyllus) with two calf hide membranes (tuga) with jak hoops attached with steel nails and nylon string. Cotton ropes hold the hoops of the membrane and are used to tune the instrument. The shoulder belt in a cotton and synthetic mix red and gold textile is attached to the drum with cotton string. One dyed woollen ball in burgundy, red, green, blue and bright pink is attached to the playing side of the drum.

In Kerala the iḍakka is considered to be a Devavadyam, or auspicious instrument. The coloured woollen pompoms attached to this example symbolise the 64 arts, among them dance, singing, and architecture, that are ideally mastered by young men and women. The idakka is thought to be one of the most difficult instruments to play. The drum is suspended over the left shoulder from the strap, and held in the left hand. The right hand plays the drum using the drumstick in a rotating (uruttu) style, whilst the left hand, placed on the drum body, varies the tension of the lacing to alter the pitch of the playing head. In this way simple melodies over one octave can be played. The idakka is one of four percussion instruments that plays in the pancavadyam (a Keralan temple orchestra) and is also used to accompany dance forms including mohini attam and krishnattam. The idakka plays in kutiyattam and is used as an accompaniment to singing during puja time. In Kathakali dance-drama, the idakka is played when a female character holds the stage, alternating with the centa drum, which symbolises a male presence.

422.112-7 (Single) reedpipes with double (or quadruple) reeds with conical bore, with fingerhole stopping