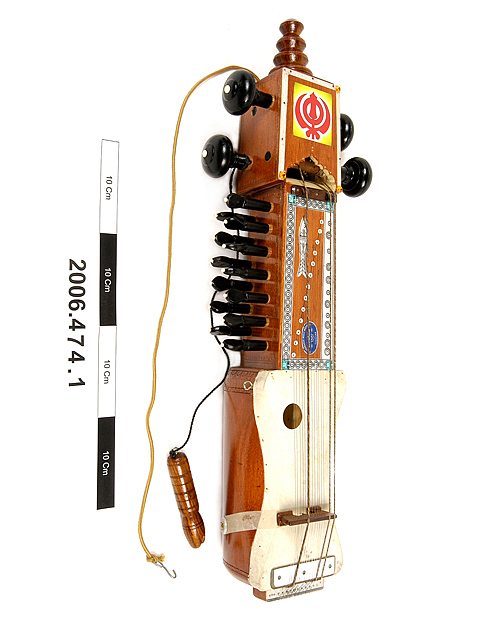 Chhoti (small) sarangi. The body, neck, pegbox and turned finial of this bowed stringed instrument are carved from a single block of champ wood (Michelia Champaca L.), varnished with a spirit gum applied in four coats. The pegs, nut for the playing stings 'surdhari' (rhythm-maker) and bridge 'ghori' (mare) are of shisham wood (Dalbergia sissoo Roxb.). A vertical wooden post running the length of the body cavity is fixed within it, before the goatskin soundtable is glued to the surface and sides of the body. A leather strip reinforces the table beneath the bridge, which is positioned so that the foot on the bass side is supported by the body of the instrument below the skin. Three playing strings of twisted goatskin tuned from large pegs in the head. The top playing string is the melody string tuned to the tonic: E-flat 4 (e-flat'). The playing string next to it is tuned in unison with it and functions as a drone. The third playing string is tuned to the low dominant: B-flat3 (b-flat), and functions as a drone.The fourth large peg has no string. Thirteen wire tarab (sympathetic) strings tuned from the side of the neck. The string-holder 'tardhan', and rectangular plate to relieve the pressure of the strings on the distal end of the soundtable are faced with sunmica. The top of the pegbox bears a label depicting the Sikh emblem Khanda, in red on a yellow ground.
Made at the Guru Nanak Music Works in the village of Boparai Kalan, Ludhiana district, Punjab.

The instrument is played standing and the player wears a cord strap to hold it in place. It is bowed underhand. The strings are stopped with the nails of the left hand. The chota sarangi is usually played with the dhad the hourglass-shaped drum. The instrument is normally tuned with a digital Cassio tuner or to the harmonium. The BhirÄ�Ä«n (dot over â€˜nâ€™) who are agricultural workers as well as musicians play â€˜â€¦the simple bowed fiddle (chot(dot under â€˜tâ€™)Ä« sÄ�ran(dot over â€˜nâ€™)gÄ«â€¦â€™ Adam Nayyar â€˜Punjabâ€™ (Pakistan) in South Asia: The Indian Subcontinent: The Garland Encyclopedia of World Music, ed. Arnold, Alison (New York : Garland, 200) p. 769