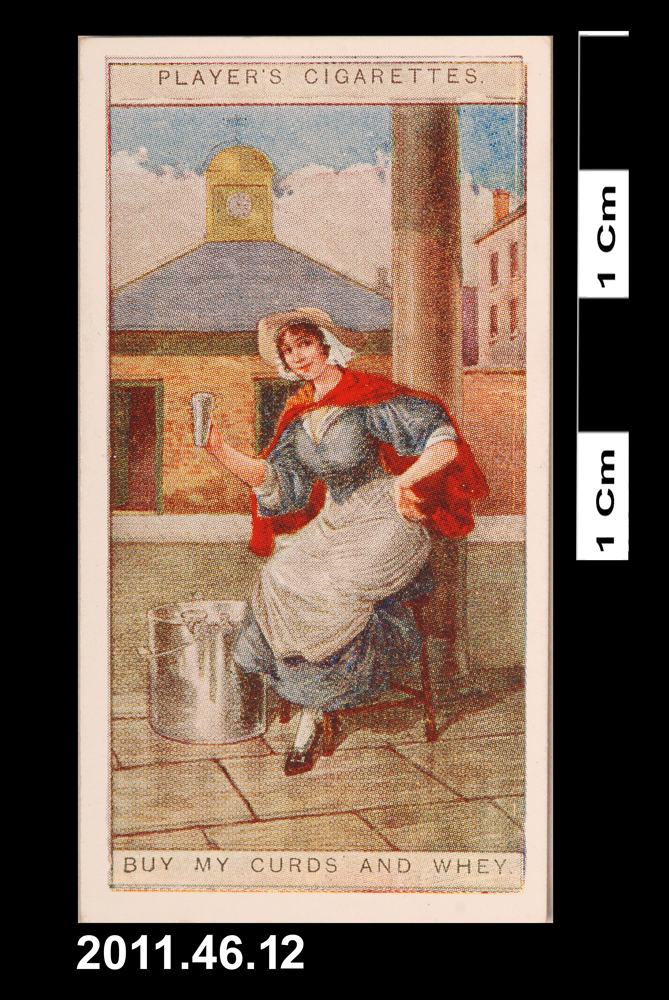 Cigarette card with a colour image of a woman sitting on a stool, raising a cup in her hand with a metal bucket next to her, entitled 'Buy my Curds and Whey' Text on reverse reads: ' In an old comedy of 1659, a seller of Curds and Cheese is introduced, crying, “I have fresh cheese and cream. Come who buy?” In all probability she had been plying her call for centuries before that, for the trade in milk, &c., must have been of very early origin. The carriers employed by the milk dealers of the 18th century were usually strong-built Irish or Welsh girls, who sold milk at fourpence a quart, and cream and one and fourpence a pint. ' Number 12 in a set of 25 cigarette cards entitled 'Cries of London'. Issued by John Player & Sons, a branch of the Imperial Tobacco Co. Ltd.

This cigarette card, depicting the centuries old trade in ‘curds and whey’ (probably referring to ‘junket’), brings us to the point of sale. Its a stereotyping assertion that ‘[t]he carriers employed by the milk dealers of the 18th century were usually strongly-built Irish or Welsh girls’ reminds us that such products were produced, traded and consumed across lines dividing people of different socio-cultural backgrounds and interests.