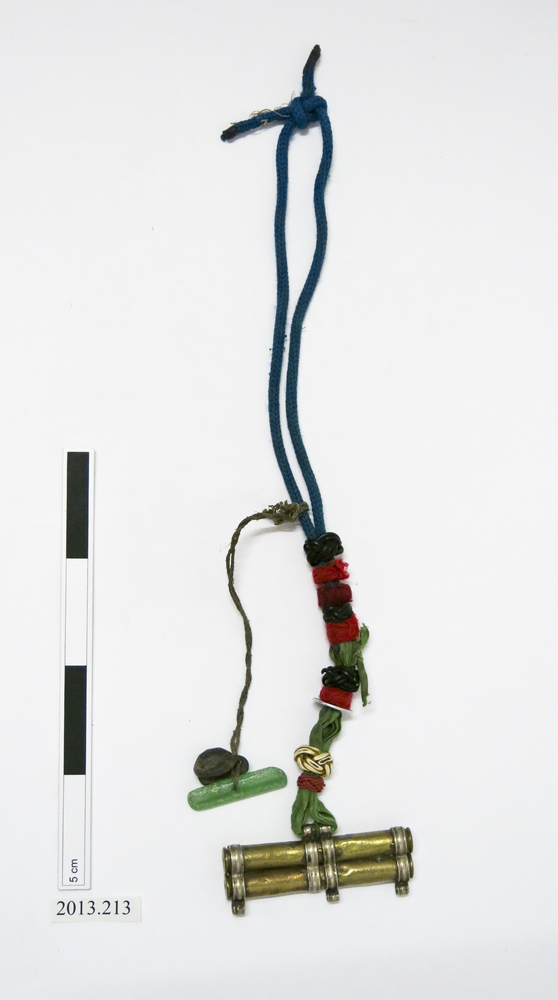 Needle case ('kab-cho'). The case would have been suspended from a chatelaine or belt from the two strands of blue nylon parachute cord. At the base of the parachute cord, a green plastic toggle is attached by a leather thong; its use is unclear. About halfway along its length, the suspension cord changes from parachute cord to a green cotton textile. Knot-work in white, red and black electrical wire, red thread bindings and a drilled through Chinese coin decorate the lower part of the suspension cord.

Four brass cartridge cases bound in white metal detach at the centre to reveal four containers in which to store needles. Three needles are stored in one of the cartridges, stuck into woollen thread wadding to keep them from falling out when the case is opened.

Needle cases or 'kab-cho' are often carried by Tibetan nomads on their chatelaines. Needles are vital tools when it comes to repairing clothing or equipment, but they can be difficult to replace when away from permanent settlements and, as we all know, they are very easy to lose. 'Kab-cho' represent an ingenious way of keeping needles safe whilst on the move.