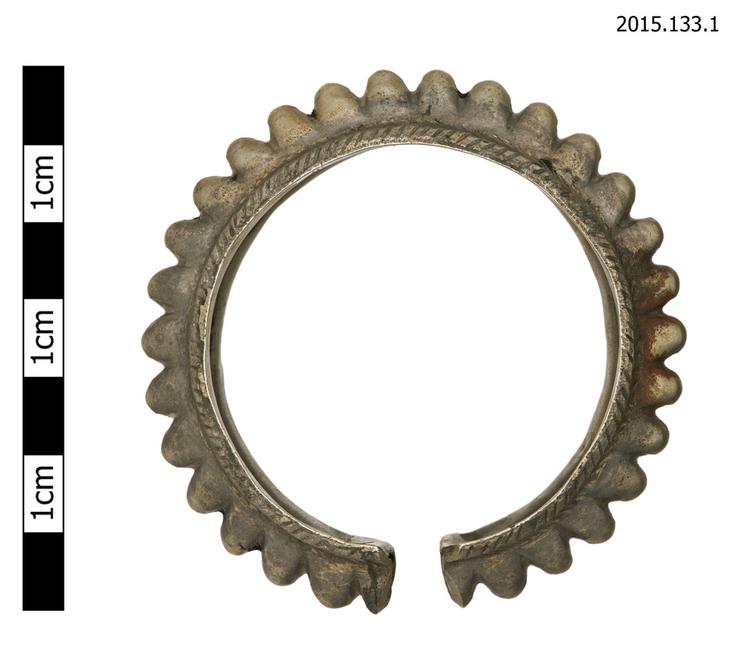 One of a pair of Langajulako, bracelets made of silver. Each bracelet is an incomplete circle, and has a ridged surface. They were worn by women to protect themselves from their husbands or unwanted male attention.

The owner of the bracelet was Uyoing Ching who is 55 years old. She is a divorced lady living with one daughter (31 years) and one granddaughter (4 years). Her husband had remarried but died. She was born near the Golden Temple. Her family had lived comfortably, owning land and property. When she had money problems, the family moved to this small town near Bandarban to live in a rented bamboo and concrete home. Uyoing was the oldest child of 7 children, and oldest girl of 4 daughters. Langajulako: lan (husband), ga (protection), ju (spikes), lako (bracelet). She was given the Langajulako when she was 30 years old (1988). Her mother had given the bracelets as a gift from generation to generation (inheritance). Her mother was 45 up (born approx. 1943) at the time, and considered to be getting old. Her mother had told her to take care of the ornaments as they were handed down from the generations. Uyoing received it as a generation gift from her mother. Her mother had received it too from her mother. Uyoingâ€™s great grandmother had received it from her parents as a wedding gift. How old does it make the bracelets? Looking at dates given, I guess that the bracelet was given to Uyoingâ€™s mother when she got married and if her mother wore it, the bracelets are dated pre 1943. Women used to wear the bracelets all the time along with necklaces and silver chain belts. Uyoing was proud of wearing these old things. Uyoing stopped wearing the bracelets when gold became more fashionable. She put the bracelets away and locked them up in a safe trunk. When asked if she understood the meaning and function of the bracelets, she told us it was to protect herself from her husband or unwanted attention from men. She had only experienced its power once when her husband and she had quarrelled but that she had inadvertently hurt him when she crossed her arms. The bracelets were necessary back then when there were no police or when women spent long days on their own whilst their men cultivated jum fields, often hours away by foot. Now there are people to help you if a man attacks you, so they have little use. Moreover, silver is not of value compared to gold. When asked what she will do with the money for the bracelets, she shares her dream to set up her own business as a bank for women who want to grow vegetables and herbs and spices. I asked her daughter if she was disappointed not to be getting the bracelets. She said that she had no use for it and that she didnâ€™t see the value of the bracelets in the same way as her motherâ€™s before her. First a gift to a bride and then it became part of an inheritance gift from generation to generation. There is one old woman who still wears the bracelets â€“ she comes to the market and sells vegetables. Consulting the tribal institute, these bracelets appear to be unique to this cultural group. They are made locally as the Marma people have been in this area since the 1600s.

Kitchen Gods seated at a table