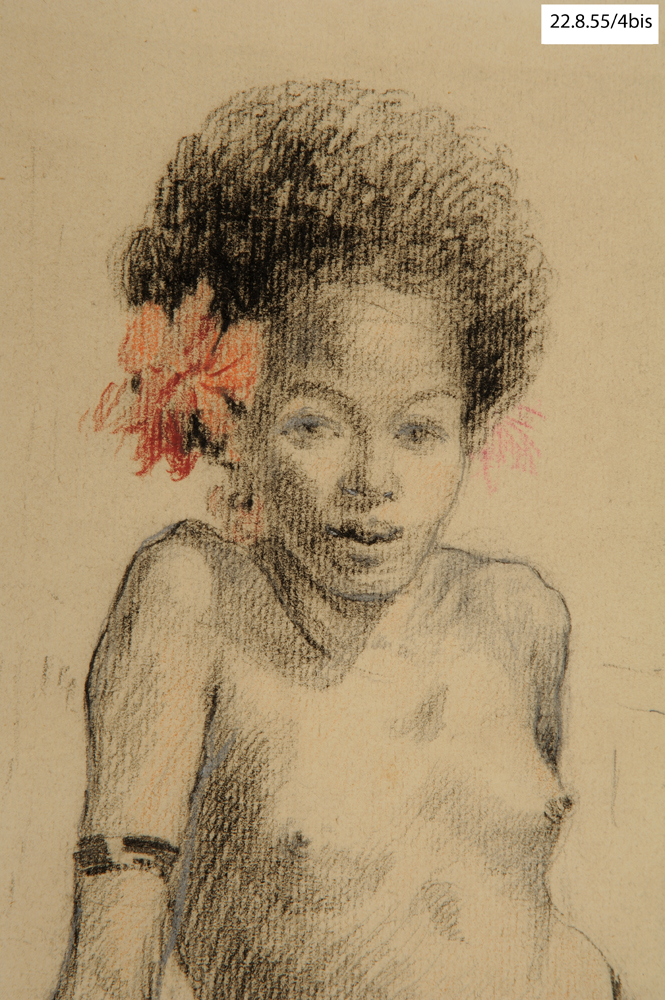 Colour drawing of girl from Trobriand Islands. Crayon/pencil on paper.

Drawing of a Trobriand Islands Girl, Ellis Luciano Silas, April 1922 An English artist of Italian descent, and an academically trained pupil of Walter Sickert, Ellis Luciano Silas is best known as a war painter who recorded the hellish conditions faced by ANZAC soldiers fighting at Gallipoli during the First World War. Silas went out to the Trobriand Islands off New Guinea's southeastern peninsula only a few years after the great Polish anthropologist Bronislaw Malinowski had brought the remarkable culture of the islanders to widespread public attention. In some ways, this is a classic nude study of a young girl in the typical academic style. Like most images of this type in Western art, it makes a sexual object of the reclining, coquettish girl, somewhat disguised by the conventions of the artform. Given the frequent discomfort and awkwardness evident in most contemporary sitters for portrait photography in New Guinea, it seems unlikely that Silas's alluring, flirtatious subject was much more than his own externalised fantasy. In his defence, however, we can credit him with painting a realistic young Papuan woman. So many of his predecessors had depicted the various peoples of the Pacific as if they were basically the same as Europeans, Africans or Asians; this young girl, however, is as recognizably Melanesian as her 21st Century descendants. Cartridge paper, pencils. Drawn in 1922 and sold by Silas to the Horniman Museum later that year.