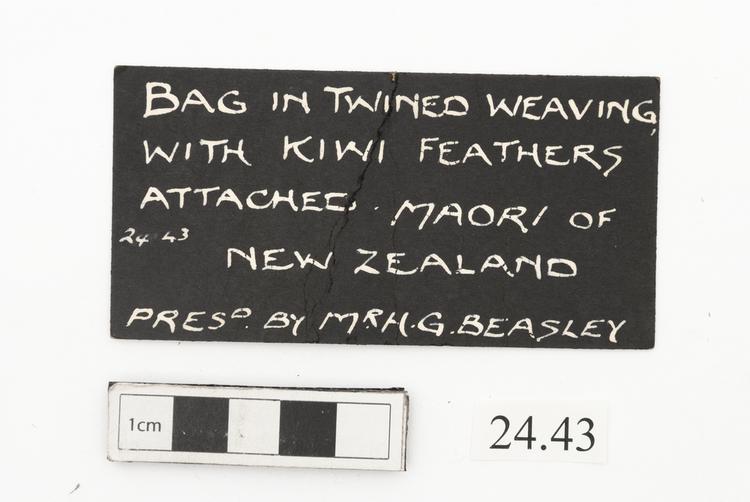 A small bag made of woven flax fibre, with kiwi feathers attached across its surface. Around the top edge is a piece of braided fibre, and the bag has two handles of braided flax attached to the rim.

Label: An old black exhibition label was found with the object.

Kiwi-Feather Bag, Kete Kiwi, New Zealand Maori. Maori women have made a bewildering range of beautiful basketry-technique bags for centuries. These bags (kete) are invariably constructed using split strips of the long leaves of harakeke (Phormium tenax), a grand and useful plant now popular around the world as a garden ornamental. Here, this base is embellished by tying in a large number of Kiwi feathers (Apteryx spp.). These feathers became popular among Maori for decorating both cloaks (kahu) and kete during the late 19th Century. With the recent incorporation of chemical dyes, plastics and even spun metals, contemporary female Maori artists are continuing the reinvent and reinvigorate the kete as an art form, making it one of the most valued, and valuable, of Maori arts in the 21st Century. New Zealand Flax, feather. Late 19th Century. Purchased from Mr Harry G. Beasley in 1924.