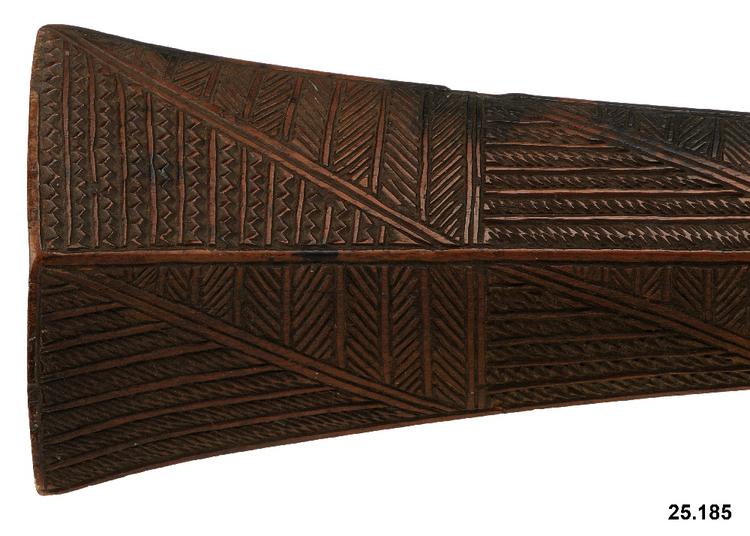 War Club, Apa‘apai , Tonga, Western Polynesia Like many weapons elsewhere in Polynesia, Tongan warclubs (‘akau tau) were understood to gain mana (supernatural power and effectiveness) every time they killed in battle. They became closely associated with the particular men and family lines that owned and used them, and their power made them dangerous for women, children and less senior men to touch. In peacetime, they were rolled in mats and stored in the rafters of the warrior’s house, or kept in the temple of his patron god. This particular type was known as an apa‘apai. Its smoothly tapering four-sided shape mimicked in toa (Casuarina equisetifolia, ironwood) the shape of a coconut leaf’s central stem. These long and stout, but flexible, stems were traditionally cut down by men of the chiefly class for use as palalafa – a kind of soft truncheon used to dole out corporal punishment and maintain social order among commoners. In this sense, the form is symbolically chiefly and speaks of legitimate authority. The elaborate engraving became one of the most complex art forms in mid-19th Century Oceania, although this is a rather simpler example typical of the period around 1800. The motifs are generally those to be found woven into fine mats, painted on barkcloth, or tattooed on the thighs and midriff of Tongan men around the same time period. They had an effect that was more than simply decorative: as in many other Pacific cultures, the wrapping of objects in cloth, and people in tattooed images, supernaturally transformed them. The mana (spiritual power) that the club possesses is both contained by this engraving, and demonstrated by it at the same time. Wood. Early 19th century. Formerly in the private collection of Mr William Oldman.