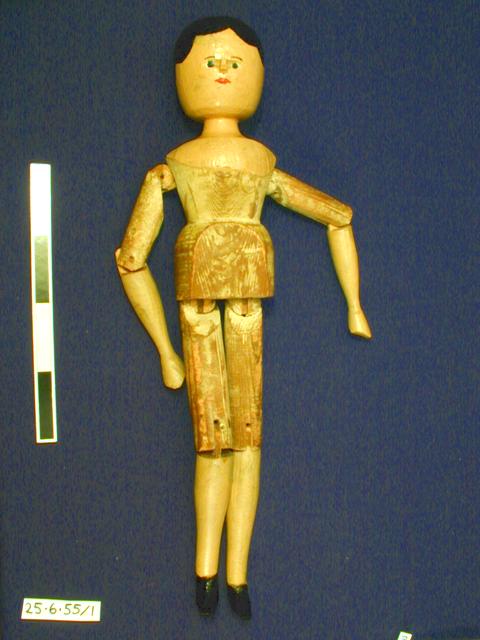 As early as the 16th century Germany was trading wooden toys. The woodcarvers who made them would travel the country selling them as they went. They were time consuming to make and only bought as gifts for rare occasions. The best craftsmen were commissioned to make toys for the aristocracy and were well paid. During the 17th century hand carved wooden dolls were of the highest quality, had expertly painted faces and were dressed in fashionable clothes. Only the rich could afford to buy them. By the 18th century the idea of educational toys such as alphabet blocks became popular and a market developed for small wooden animals and dolls. Wooden dolls such as this were at first produced in the Austria/Bavaria/Germany area by rural artisans in small isolated business but the industry grew into a well organised guild of craftsmen. Although still handcrafted 'folk' art these dolls became mass produced. They are often mistakenly called Dutch dolls for two possible reasons. Not only is there an obvious similarity between the pronunciation of Deutsch (German) and Dutch, but also, many of these dolls were sent to Holland to be exported to other countries. Given as educational gifts for girls, dressing the dolls became very popular and allowed girls to develop their sewing and embroidery skills. As a child Queen Victoria was particularly fond of playing with her large wooden doll collection and did so up until the age of 14 years. Of the 132 she owned she personally made the costumes for 32 of them, apparently showing great skill in sewing the coloured silks and satins.