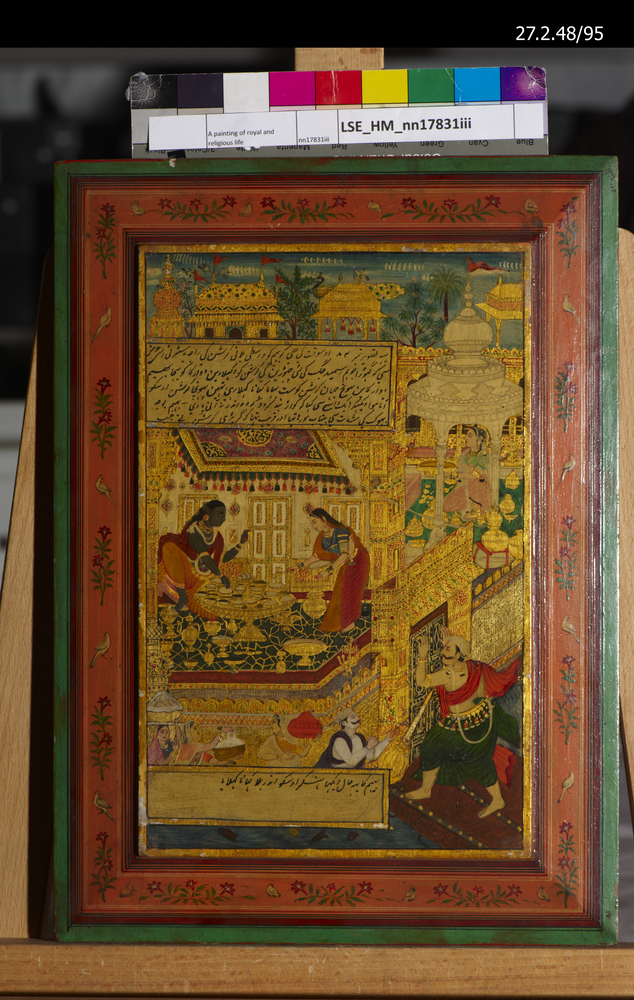 Painting on wood depicting a scene from the Mahabharata. Krishna (the figure in dark blue) has the doors of Dwarka shut on the hungry Bhima. At the bottom right of the painting Bhima beats at the gate. Three women in the lower left carry vessels and a man in front of them remonstrates with the visitor. The semi-aerial perspective allows the viewer to see two women setting out dishes on a table under a canopy inside the walls, with other vessels arranged on the tesselated floor. In the background on the right another woman kneels inside a circular white pavilion. There are two inscriptions, one in a rectangular panel above the canopy, another in a rectangular panel to bottom left. The whole is surrounded by a border in pink decorated with alternating flower and bird motifs. The text, in late 19th century Urdu, written in a cursive nasta'liq-e khafi hand, refers to the painting as 'Number 82' or 'Number 84.' The painting dates from the late 19th century, probably from the art schools of Jaipur, India, and adapts a composition from the dispersed late 16th century 'Jaipur' Razmnamah manuscript (in the Jaipur royal collection, Maharaja Sawai Man Singh II Museum, and British Library), an illustrated Persian translation from the original Sanskrit (version by Naqib Khan) created at the court of the third Mogul Emperor, Akbar I (d. 1605).