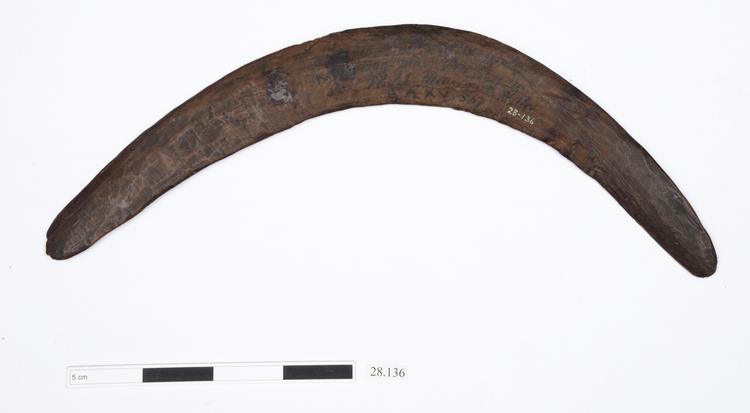 Returning boomerang carved with stone tools. Although it is asserted in earlier descriptions that this object dates to the 18th century, there is no positive evidence for this. Also, its period inscription reading: 'Weapon of Aboriginal from KA...rong near Port Fairy, Port Philip, New South Wales. y A X V 567' precludes that, as Port Fairy was only named as such in 1828 by the crew of a whaler named The Fairy; this said, the settlement became part of Victoria in the 1851, so collection occurred between 1828 and 1851.

Returning Boomerang, Kirrae People, Port Fairy, Victoria, Australia According to an inscription on it, this boomerang was collected at some time between 1830 and 1850 near Kirrae Wuurong to the northwest of Port Fairy, in what is now the State of Victoria. It is, therefore, a fine example of an Aboriginal Australian returning boomerang carved with stone tools. This is interesting, because the consumer demands of foreigners fascinated by these remarkable objects began to change their style very rapidly. It is often believed that all boomerangs were weapons for hunting or warfare, but returning boomerangs such as this were purely recreational playthings for adult men. A number of throwing, catching, passing and avoiding games were played throughout the Australian continent, for solitary men and men in groups. Wood. Circa 1840. Formerly in the private collection of Major S. S. Flower, MD.