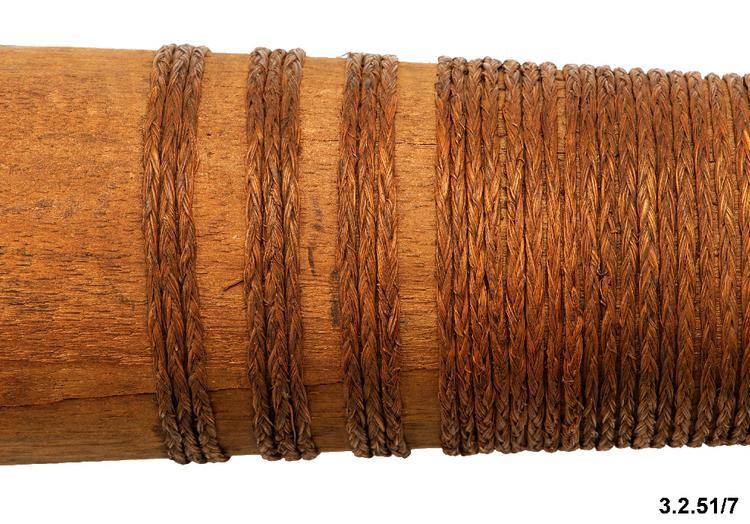 Club-like bat for Samoan version of cricket. Strongly tapering form of sub triangular section which is bound with coconut fibre cordage for the lower two thirds.

Samoan Cricket Bat, Pate Kilikiti, Samoa, Western Polynesia. This is a bat for playing the national game of Samoa, kilikiti. When British missionaries arrived in Samoa in the early 19th Century to preach Christianity, they brought the game of cricket with them. The Samoans quickly saw the attraction in the game, but they also identified that there were some aspects that could be improved to make it more entertaining by Polynesian standards. Kilikiti is like the standard international game in some respects: there are two sides, and one side bowls and fields the ball while the other side bats and defends their two wickets. Otherwise, there is little resemblance: there is no upper limit to the size of a kilikiti side, and each side is usually composed of all of the men, women and children from a particular village who want to play. Games can go on for an unlimited number of days, and there is not necessarily a clear winner at the end. Rules tend to be made up and revised on an ad hoc basis. There is singing, dancing, music and food, and a kilikiti game can look more like a festival than a traditional English cricket match. The size and triangular shape of the pate kilikiti, then, is only one small way in which the game differs, but it has a significant effect on how the game is played, because it makes the direction of the struck ball much less predictable than the two-sided bat. Wood. Early 20th century. Formerly in the private collection of Mr C.E. Berry.