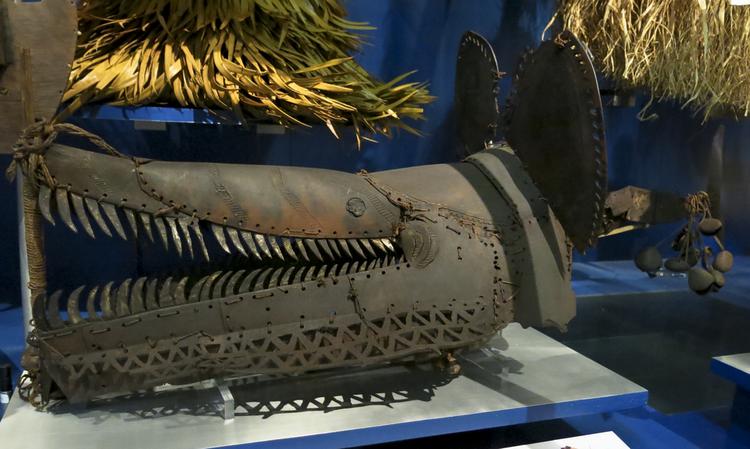 King fish mask constructed from several overlapped and stitched pieces of turtle shell which have been formed over wooden moulds after boiling. The mouth of the fish is full of serrated teeth, and is supported by a wooden stick joining the upper and lower jaws together. Two rectangular panels of the same material with triangular fretwork cut-outs are stitched onto the sides of the mask, and the fish’s tail is constructed from plates of the same over a scaffold of small wooden splints. A rattle of goa nuts hangs from the chin and the tail of the fish. The panel of shell nearest to the viewer is engraved with a barred eye motif. The king fish has two rounded projections stitched onto its back which probably are meant to represent fins. These are also engraved with hatched and zig zag designs. The mask is fitted with an elaborate strap of plaited coconut fibre cordage, and has inset eyes of a resinous material.

King Mackerel Mask, Dabor or Debu, Torres Strait Islands, Australia Turtleshell masks such as this one were a speciality of the Torres Strait Islanders, and they sailed far down the Great Barrier Reef to catch the Hawksbill Turtles (Eretmochelys imbricate bissa) that provided the raw materials. The mask is constructed from several plates of shell that have been heated to make them plastic, moulded into shape, and stitched together around their seams. The structure is reinforced inside with small sticks, and would have originally incorporated a number of other parts. The mask is decorated with jingles of goa nut shells (Pangium edule), which would have been imported into the Islands from New Guinea. This is significant, because Torres Strait Islander histories record that two ancient heroes, Naga and Waiat, travelled down into the islands from the Gulf area of Papua New Guinea. These two men brought the secrets of making turtleshell animal masks with them, along with many other cultural and technical improvements. The Torres Strait Islanders made a broad range of animal masks (urui krar), but a form of copyright was held on each mask design; passed from father to son, this meant that only certain family lines could make or dance each mask. When young men decided to learn the making and dancing of masks (krar), their fathers would put them through a lengthy process of training and initiation. Extremely elaborate crocodile masks have attracted the most attention in the art world, but their association with funeral rites has probably added to their mystique for foreigners. Other animal masks, such as our example which depicts a King Mackerel (Scomberomorus commerson), were used in equally important increase rituals. Performed on a ceremonial dancing ground (kwod), the purpose of increase rituals is to maintain (by magical means) the number of animals available for hunting. The dabor continues to be an important food species for tropical people throughout the western Pacific and Indian Oceans. Turtleshell, nut shells, vegetable fibre. Late 19th century. Purchased by Frederick Horniman from an unknown source in London before 1898.

Cloud myths of the people