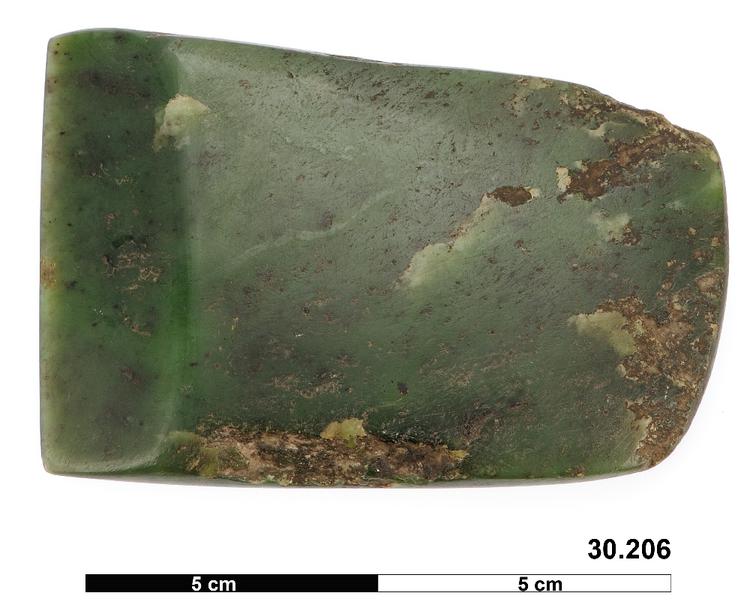 Nephrite Adze Blade, Toki Pounamu, New Zealand Maori Pounamu nephrite (greenstone) was one of the greatest gifts that the remarkable geology of New Zealand gave the Maori people when they arrived there some 900 years ago. This jade-like stone varies from almost white or blue to a deep emerald in colour, and may be mottled, cloudy, flecked, partially clear or solid in quality. Maori jewellers valued each of these different qualities and shades at different times and for different purposes. The stone appealed, however, not only for its intrinsic beauty, but also for its practical hardness and ability to take a sharp, resilient edge when ground on a sandstone whetstone (hoanga). While their ancient ancestors in tropical Polynesia had relied on basalt for their tools, the Maori could exploit pounamu as the finest among a number of superior stones. Many of these pounamu adze blades were set into elaborately engraved ceremonial hafts after the Western introduction of metal tools, when they had become ceremonial objects. They became ancestral treasures (taonga) embodying the identity and spiritual power (mana) of the Maori groups that owned them. Because of these elaborate hafts, and drawing analogy to the ceremonial adzes of the Cook Islands Maori people, some people have argued that pounamu Maori adzes were also entirely ceremonial. However, many bear evidence of use, chipping and regrinding that seems to indicate they were very much used for carving. Perfectly practical Maori tattooing chisels (uhi) also have equally elaborate hafts. Most likely, blades which had distinguished themselves by carving exceptional works gradually became viewed as increasingly powerful, and became more and more precious over time. Nephrite. Mid-19th Century. Formerly in the collection of the Theosophical Society (London) and passed to the Horniman Museum with other ethnographic specimens in 1930.