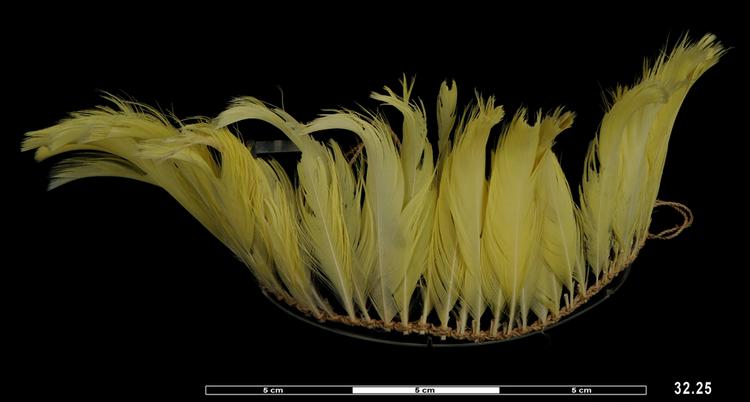 Yellow feather headdress constructed from the crest feathers of the Sulphur-Crested Cockatoo. Headdresses such as this were worn from ear to ear over the top of the head.

Cockatoo Feather Headdress, Mekeo people, Central Province Papua Papua New Guinea. Although many people think of the Sulphur-Crested Cockatoo (Cacatua galerita triton) as a domestic pet or a zoo animal, in its native New Guinea it is a widespread and very common forest bird. These cockatoos are an important source of meat for many New Guinea peoples, and apparently very flavoursome. The birds are also a valuable source of bright feathers for artistic purposes. The Mekeo people use the bird's yellow head feathers to make single-row headdresses like this example, which are worn over the top of the head from ear to ear. Feather, vegetable fibre. Early 20th Century. Collected by Dr Robert W. Williamson and purchased from him by the Horniman Museum in 1932.