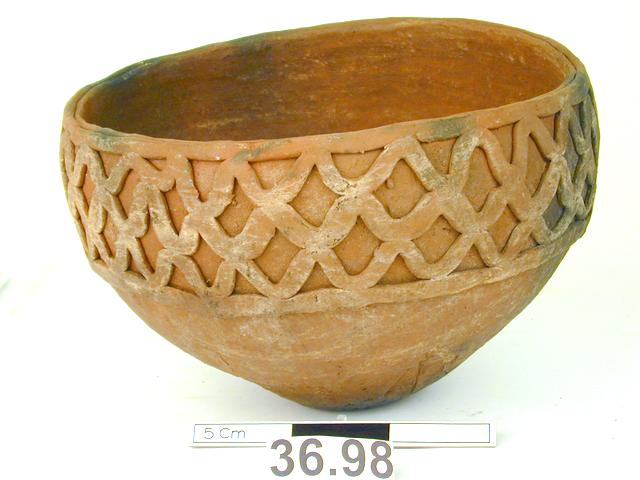 Terracotta clay bowl, conical in a shape with a flattened base, rounded body, and wide rim. There are five applied coils on the shoulder, three of which form a zig-zag pattern; the other two form the border.

Cooking Pot, Bosman People, Ramu River Delta, Northern Papua New Guinea Although pottery was made throughout Melanesia in prehistoric times, the art seems to have been abandoned centuries ago in most parts of the region. The north coast of Papua New Guinea is an exception to this general rule, and there seems to have been continuous production of ceramics in that part of the island for several thousand years. In general, Pacific pots were fairly simple, functional tools, and those of the Bosman are no exception. The pots are distinctive in having a conical base. On a flat, hard surface, this obviously makes them impossible to set upright when full, but such buts are intended for standing in the embers of an open wood fire, or setting upright in a little hole. Many of the (generally female) Melanesian potters also weave little cane rings in which pots can be stood up. As might be expected from the application of little coils to the surface to make up its fish-scale decoration, the body of the pot itself is constructed using a coil-building technique. Such cooking pots were made in various sizes, and exhibit a range of similarly applied repetitive geometric decorative patterns. They were a useful export for the Bosman, who traded them throughout the Ramu river system. Earthenware. Collected in 1936 on the Ramu by W. G. Guiness, first Baron Moyne.