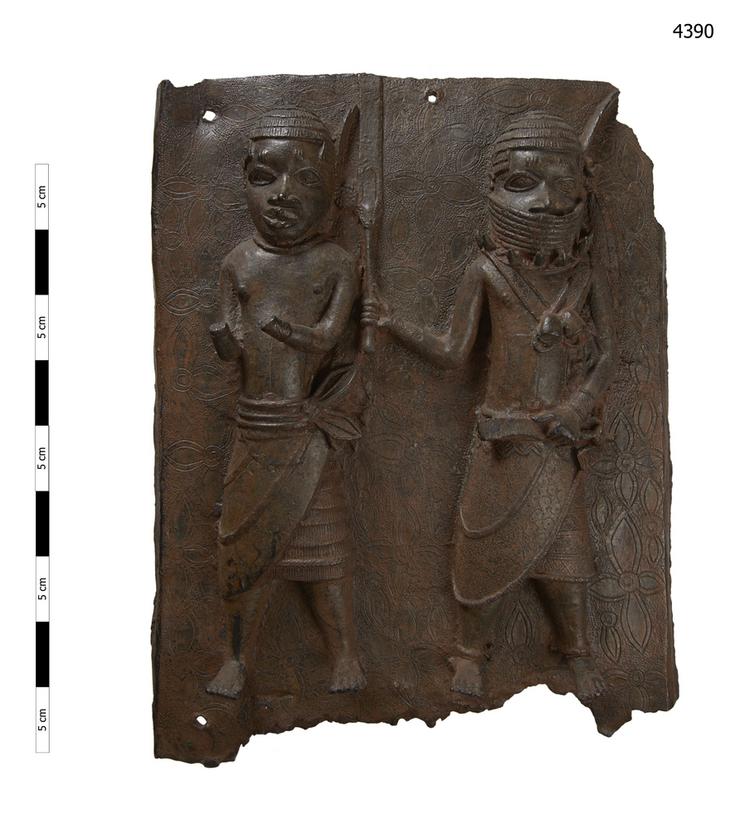 Bronze plaque depicting the Chief Priest of the River Deity, Okhuaihe, and a Civil Commissioner, presenting a leather box (ekpokin) containing the head of a rebel ruler to the Oba as proof of victory.

The Ohen Okhuaihe is wearing the high bead collar (Odigba), a leopard tooth necklace (Akon Ekpen), and around his neck are two brass bells (Egogo Ohen) of oval shape. A fish eagle feather (Igan Oghoghon) is stuck in his plaited hair, and his right hand is gripping a spiked club (Ukpokpo Igban). His left hand grips a broken sword (Umozo), which symbolises the broken powers of the rebel who had once owned it. His torso is marked with Iwu (royal tatoos), and above his eyebrows are the Benin marks, Ik'aro. His wrapper is embroidered and edged with coral beads, and he is wearing ankle beads (Ivie Owe).

The Avbiogbe figure also has plaited hair, with a long coiled strand of hair holding a fish eagle feather (Igan' oghohon). Around his neck is a single strand of beads, an indication of his Uko (emissary) status. He would have been holding the leather box (Ekpokin) containing the soil of the re-conquered territory and or the head of the ruler. This part has now broken off. His wrapper is topped by a decorated sash, and under it is another wrap-around skirt with tassles, called Ebuluku.

The background of the plaque is decorated with Ebe amen an Olokun water leaf motif.

Bracelets like this, known as manillas, were used in Ancient Benin as a type of currency to trade with European traders. How is it used? European traders brought these metal bracelets, called manillas, to Ancient Benin to exchange for goods. Because they were also used to buy slaves they became known as â€˜slave trade moneyâ€™. Once inside the country some manillas were melted down by craftsmen to make brass works of art but others stayed in circulation and were used as currency by the local people. They were officially used as currency throughout West Africa up to 1911 when they ceased to be legal tender. Who is it used by and why them? When European traders arrived in Ancient Benin in the 15th century, people were already wearing bracelets made from copper and brass. Brass casters were already producing many beautiful works of art so the demand for ready made brass, which could be melted down, was high. Some of the larger manillas were worn as a sign of wealth. These were decorated with incised patterns, had additional strands of metal coiled around them and extra large flat ends. The first 15th century European traders quickly saw the demand for metal bracelets in West Africa and recognised its potential as trade currency. Since the British were heavily involved in trade with West Africa, manilas were manufactured in Bristol and Birmingham. They were used as trade currency from the late 15th to the early 20th century by all European traders mainly along the equatorial coast. They became known as â€˜slave trade currencyâ€™ because they were used to buy slaves throughout West Africa who were sent to work on European owned plantations in the Americas. The manufacture and use of manillas began to decline in the 19th century as the transatlantic slave trade became less profitable and was wound down. By the end of the 19th century they were mainly used only in Palm Oil trade. In 1911 manillas ceased to be legal tender and in 1919 the "Manilla Currency Ordinance" forbade their use by foreign traders. When the West African Currency Board introduced new money people still used manillas illegally alongside it. In order to stop this continuing, during the 1940s and 1950s local people were encouraged to â€˜cash inâ€™ their manilas even though they were no longer legal currency.