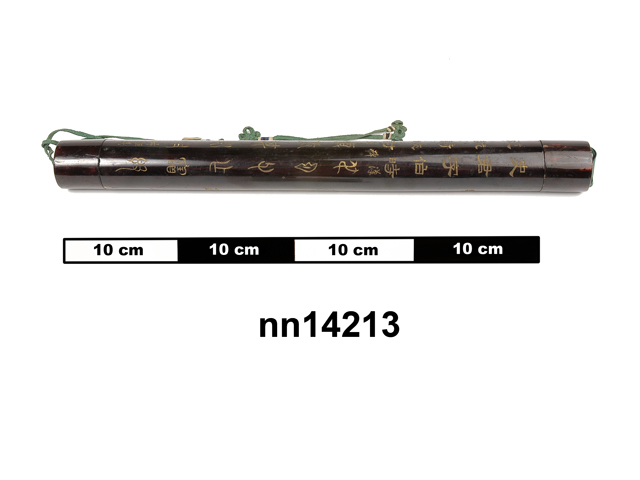 Lacquered box for necklace worn by mandarin. The surface of the box is covered with inscriptions. The top two columns in clerical script read: 史君字伯時，從越騎校尉 ‘shi jun zi bo shi cong yue qi jiao wei’, which means that ‘Mr. Shi, who styles himself as Po Shi, is the captain of light cavalry’. It is a quote from the inscription of a tablet made in the year 169 recording how Shi Cheng, the prime minister of the country Lu, worshipped Confucius in the Eastern Han dynasty. The style of this inscription is regarded as a standard reference example of clerical script and has become an important resource for learning calligraphy. The band in the middle of the box reads 漢碑文 ‘han bai wen’, referring to ‘Han dynasty inscriptions on a stele’. The two columns in oracle bone script are probably based on inscriptions on an ancient bronze. The right column reads 叔O父作寶簋 ‘shu O fu zuo bao gui’. The second character is difficult to identify. It might be 耳/月/夕, however, this does not affect the meaning of the inscription. The meaning of the sentence should be understood together with the left column. The left column reads 尊彝其永用 ‘zun yi qi yong yong’. Again, the second character is identified as ‘Yi’ but this is not absolutely clear. In combination, these two sentences mean roughly ‘shu O fu (a person’s name) made this precious ritual bronze as an eternal heirloom for descendants to be passed down from one generation to another.’ Originally, 簋‘Gui (or Kuei)’ means a certain kind of bronze food vessel and 彝 ‘Yi’ refers to another particular wine vessel, but when they are mentioned together, they simply represent a general term for sacrificial bronze containers.

Similar archaic bronze script were carved on a small brush pot made in the late Qing period (1796-1850), which read as, "Master made a tripod of honour, hoping that it would be used with respect forever." See pp. 388-9. Kwan, Simon (2000), 'Ming and Qing Bamboo', Hong Kong: University Museum and Art Gallery, The University of Hong Kong.