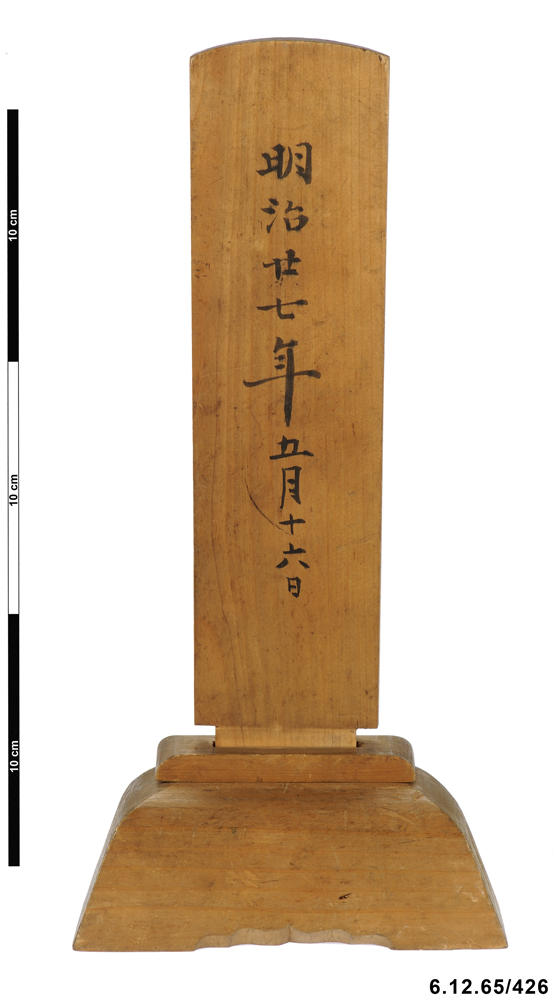 Wooden ancestral tablet, shiraki-ihai, a vertical slat of unvarnished wood set in a broad base. This is a temporary ihai used only until shijukunichi (the 49th day after the date of one's death). After the 49th day, a permanent ihai of black lacquer with golden inscriptions is placed in the butsudan. The tablet has inscriptions on front and back, reading: 嶺光院貫誉静心居士 (Reikoin Kanyo Joshin Koji) and on the reverse 明治廿七年五月十六日. The inscription on the front is the name. The first three characters are called the 'ingo'. In the past ingo were only given to nobles, but nowadays those who have dedicated their lives for the betterment of temples and society can have one and there is no relationship between the ingo and a real temple. The second two characters, 'yogo', represent an epithet given only to people who are part of the Jodoshu sect of Buddhism. In the past 'yogo' were only given to people who had received an ordinance called 'Goju-soden'. However, nowadays, even those who have not received this can have one. This person died on May 16, Meiji 27 (1894) so he might have received an ordinance. The next two characters are the 'Kaimyo'; originally this is the name given by the priest when a person enters the priesthood. There is no special meaning in this. 嶺光院, 貫誉, 静心, are all very common combinations of Chinese characters in the naming of kaimyo. The last two characters are the 'igo', which used to refer to the rank of the deceased. However the igo now reflects on the depth of one's faith and the amount of contribution to society. The deceased in this case is referred to as 'Koji', which is for an adult male and is higher in rank than 'Shinji' but lower than 'Dai-koji'. The inscription on the reverse is the date, which reads: Meiji 27th year May 16th.