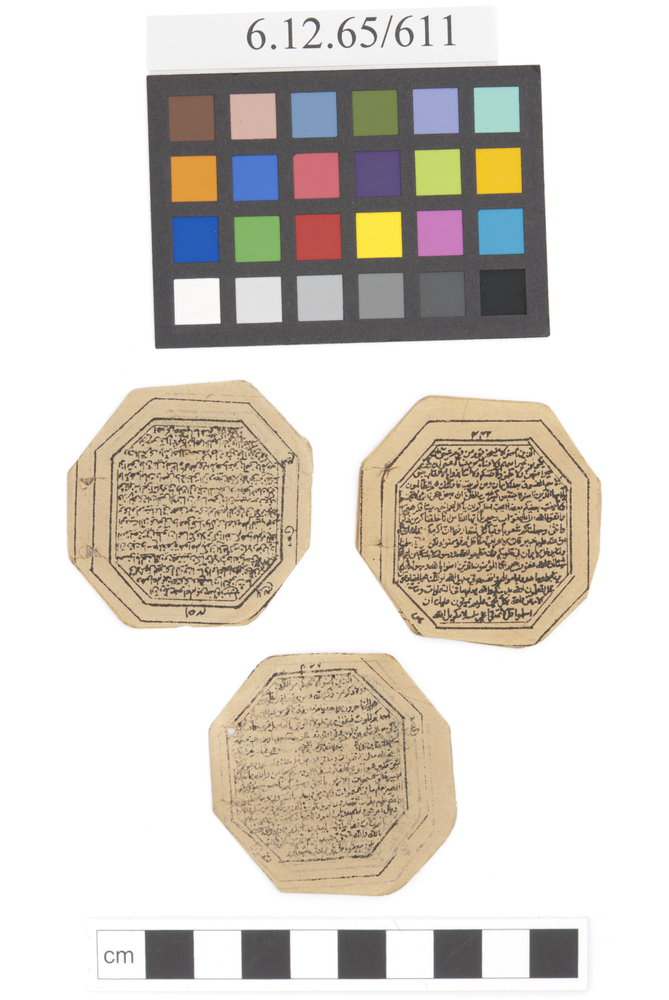 Koranic amulet case of silver with hinged lid. Elaborately decorated all over lid and sides, with further decoration and openwork on base. Two heart-shaped loops at top and bottom. Contains octagonal sheets of paper printed with inscribed verses from the Koran.

This amulet is probably of the bazuband type, meaning that it would have been worn on the upper arm and held in place by a thong laced through the loops at either end. The amulet contains printed verses from the Quran, which adds to its efficacy as every Quranic verse is understood to posses a force that can counteract evil and disease. The inner ring of the amulet's lid is engraved with the Bismillah (بسملة) and the Ayat Al Kursi (آیت آلکرسی) verse from the Quran (Surah 2:255). The Bismillah can be translated into English as “In the name of God, the Most Gracious, the Most Merciful”. It is used at the start of each chapter or surah of the Quran as well as in many other contexts. When engraved on jewellery the Ayat Al Kursi provides protection for the jewellery's wearer. Some Muslims say the Ayat Al Kursi when they leave home so that they may be protected for the day ahead. In many Muslim homes a copy of the Ayat Al Kursi is hung on the wall to provide protection for the household. Muslim children are taught the Ayat Al Kursi from a young age. Sir Al Hajj Muhammad Zafarullah Khan's (1971) interpretation of the Ayat Al Kursi in English reads as follows: “Allah is He save Whom none is worthy of worship, the Ever-Living, the Self- Subsisting and All-Sustaining. Slumber seizes Him not, nor sleep. To Him belongs whatsoever is in the heavens and what- soever is in the earth. Who is he that dare intercede with Him, except by His per- mission? He knows all that is before them and all that is behind them, and they cannot compass aught of His knowledge, except that which He pleases. His knowl- edge extends over the heavens and the earth, and the care of them wearies him not. He is the Most High, the Most Great."