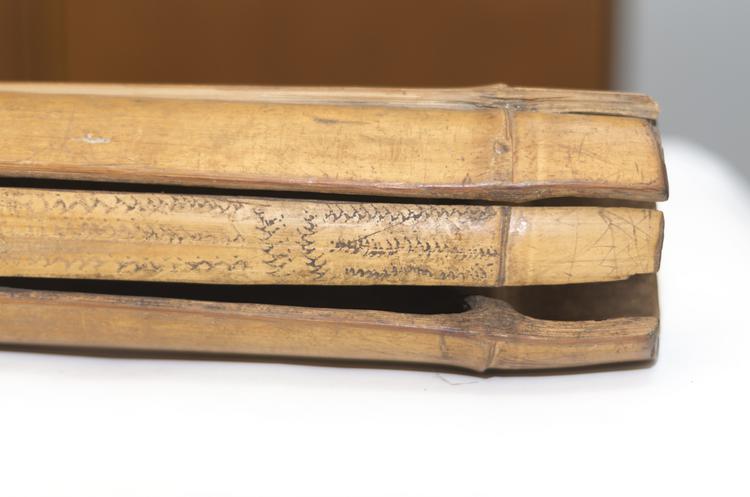 Sede slit drum made from a large-section tube of bamboo, longitudinally cut into several bars at one end, which resonate with a metallic tone when beaten with two sticks. Drums such as this were used on board large lakatoi trading boats.

Bamboo percussion stick, Sede, Motu People, Central Province, Papua New Guinea. The bamboo sede is a unique form of percussion instrument constructed by the Motu people. When played with short sticks on its long tongue of thick-sectioned bamboo, it has a metallic and high-pitched tone that contrasts pleasantly with the woody bass tones of Motu reptile-skin drums. The coastal-dwelling Motu have a rich history as wide-ranging traders along much of the southern coast of Papua New Guinea. In the legends of the Motu, the secret of building the great lakatoi trading vessels that enabled this merchant voyaging was gifted to their ancestors by the culture hero Edai Siabo. Edai Siabo stipulated that one part of the ceremony marking the boat’s completion and rendering it available for use was the playing of sede on deck to accompany vigorous dancing by men and women. Because the Motu people didn’t know how to make such an instrument, he taught them the method, and also instructed them in the ‘boat song’ (lakatoi ehona) which their playing accompanies. Bamboo. Late 19th Century. Collected on the Cooke-Daniels Ethnographic Expedition in 1906.

422.211.2-71 Individual reedpipes with cylindrical bore, with fingerholes and keys