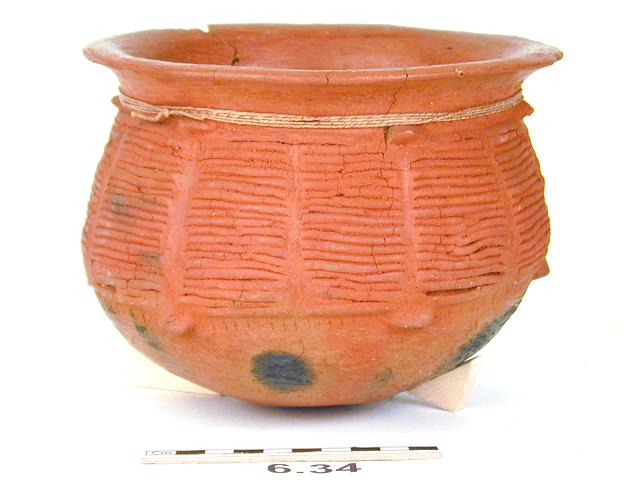 Globular Terracotta Pot with Applied Decoration, Pespia village, Eastern Santo, Vanuatu. Although finely made pots were produced throughout Melanesia and Western Polynesia in remote prehistory, one of the unsolved riddles of Pacific archaeology is why the art of pottery was abandoned in most places around 500 BC. By the early years of the 20th century, only a handful of the remaining ceramic traditions had endured the impact of Westerners importing metal and glass containers. The area around the village of Pespia on Espiritu Santo in Vanuatu is one such area, and this globular pot is a fine example of Pespia ware. The bowl is made from slipped earthenware: the pot is first built using a local clay retaining many of its natural impurities. It is fired in an open wood fire and then coated with a thin milky layer of the attractive reddish- pink terracotta which is imported into Pespia for this purpose. The impurities in the body clay act as a flux to fuse the two layers together, and the evidence of the pot's secondary firing can be seen in the attractive charring on its bottom. Unusually, two different methods of hand-building pots coexisted in close proximity on Santo. At Wusi, round-bottomed pots are built from balls of clay using a paddle & anvil technique, while Pespia potters use a more widespread coil-building technique with an unusual twist. As can be seen in the form, the pot is made in two halves: the walls and rim are first built up, and then the pot is turned over for building its conical bottom. The decorative coils were then applied in a third building stage. In making its construction technique part of its decoration, we can recognise that the potter was speaking to other knowledgeable women about the pot's origin and manufacture. Clay. Late 19th Century. Collected on Santo 1890-1893 by Admiral E. H. M. Davis during his command of HMS Royalist.