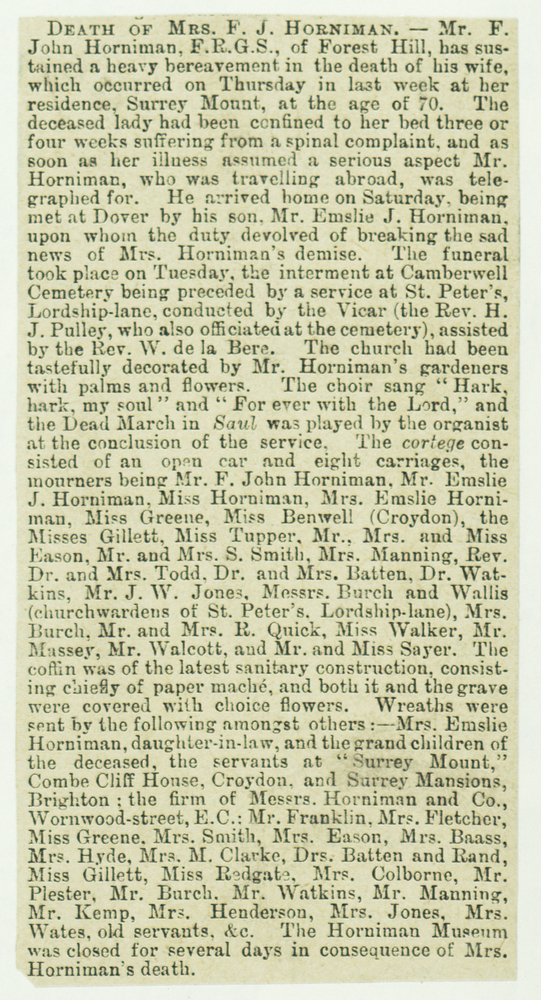 A press cutting describing the death of Mrs. F. J. Horniman from a spinal complaint which kept her bed-ridden for three to four weeks, as soon as her health deteriorated Mr. Horniman was telegraphed. He made his journey home and was greeted by his son Mr. Emslie. F. Horniman who had to break the sad news of his wife’s demise. The funeral took place at The Camberwell Cemetery, conducted by the Vicar, Rev. H. J. Pulley and assisted by the Rev. W. de la Bere. The cortege consisted of an open car and eight carriages, some of the mourners being; Mr. F. John Horniman, Mr. Emslie J. Horniman, Miss Horniman, Mrs. Emslie Horniman, Mrs. R. Quick with many others. Numerous mourners sent flowers and wreaths such as; Mrs. Emslie Horniman (daughter-in-law), the grand-children, the servants at Surrey Mount, Combe Cliff House, Croydon and Surrey Mansions, and many others. The museum was closed for several days due to the death of Mrs. F. J. Horniman.

A Handbook to the Cases Illustrating Stages in the Evolution of the Domestic Arts, Part 2: Basketry, Pottery, Spinning, and Weaving, etc., 1910