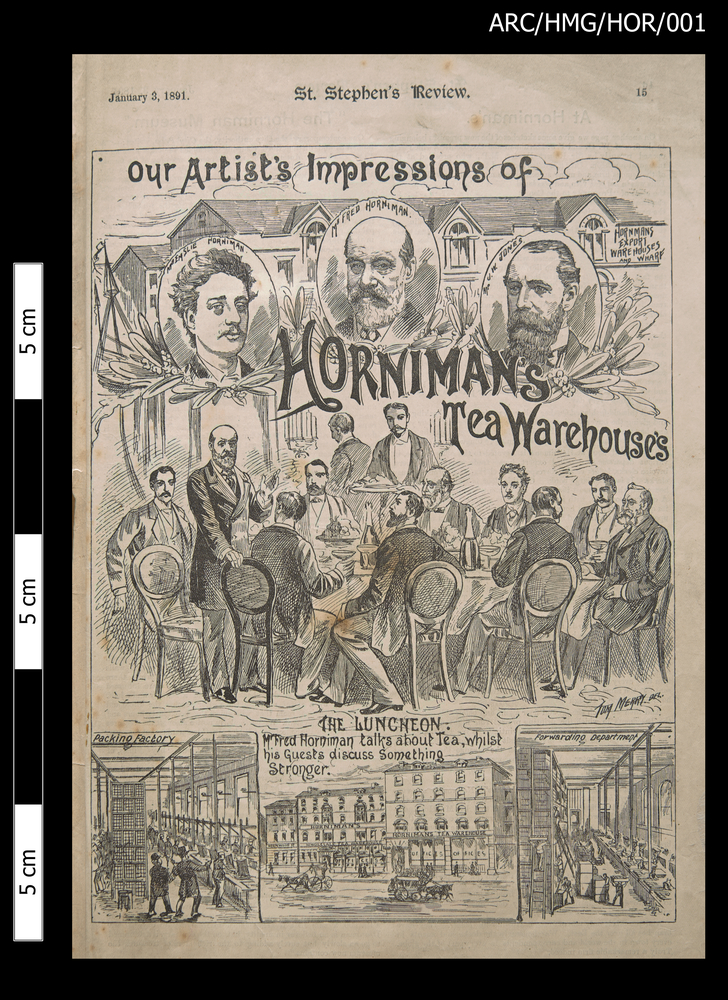 Issue number 408 of St Stephen's Review dated 3rd January 1891 containing a one page written profile on Frederick John Horniman, his tea trading, and his museum on page 14 and a full-page artist's impression of the Horniman's tea Warehouses, signed by Tom Merry (the pen name of caricaturist William Mecham). Page 14 features the headline 'Mr Fred Horniman' and a portrait sketch of F.J. Horniman. The profile describes the Horniman family's German origins, their Quaker faith, F.J. Horniman/s early life, his wife and children, his collecting and the establishment of the Horniman Museum, his family's tea trading business, and Horniman's political career. Page 15 contains a full page, black ink caricature titled 'Artist's Impressions of Horniman Tea Warehouses' depicting portraits of Frederick Horniman, Emslie Horniman and J.W. Jones. The illustration shows Horniman hosting a luncheon, the insides of the tea packing factory, the outside of Horniman's Tea Warehouse, and the forwarding department of the factory. The illustration has, at some point, been defaced with red ink graffiti by an unknown person whose text subverts the illustration into a depiction of a 'fearful tragedy' and murder involving those depicted. The reasoning for this satirical graffiti is unknown.

Black and white negative of three people rowing a long barge on water (river or sea?)

Kite flying around beyond bandstand