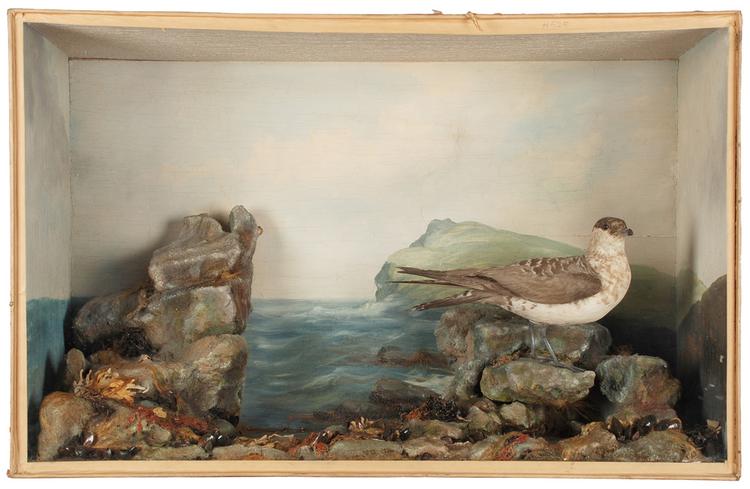 Taxidermy case of adult male and immature female Long-tailed Skua (adult male missing). According to Edward Hart, writing on 6 May 1927, 'Left (no 1): adult male, October 22nd 1891, summer plumage; right (no 2). immature female, December 2nd 1889. Shot by me on Sand Dunes, Christchurch Harbour. During October 1891 we had quite an invasion to our bays and harbour of this elegant species. Wherever a party of gulls were feeding four or five of these Skuas could be seen mobbing and taking their food. Unfortunately the majority had shed their long tail feathers. I found they were not difficult to snare, and succeeded in capturing seven or eight, sending some to the zoo. They were the first of this species ever shown there. They are easily kept in confinement, feeding and thriving on any animal food, as well as fish. Unfortunately I underestimated the cutting power if their bills, for after about 2 months they cut the brails I had placed on their wings, and so escaped from my open aviary. At that date so little was definitely known of the progressive stages of plumage which this species pass through, or of the age at which it commences to breed, their escape was a great loss. Sexes alike, summer and winter plumage differ. Mounted by me'.