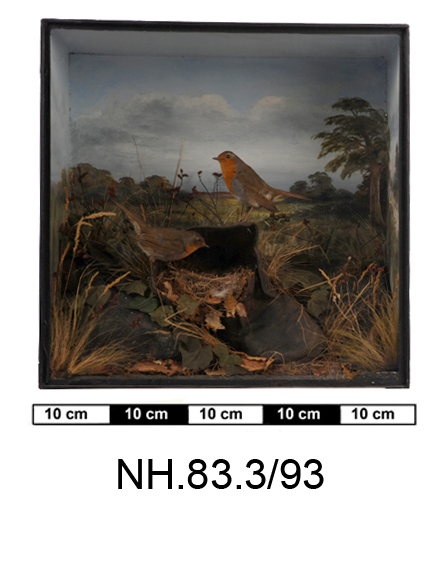 Taxidermy case of adult female and adult male European Robin. According to Edward Hart, writing on 15 April 1927, 'Left (no 1): adult female, 1910; right (no 2): adult male, 1910; nest and six eggs. These two robins made their nest in this curious site in Creedy Gardens, Christchurch. Sexes alike. Summer and winter plumage the same. Mounted by me' 'The robin from its confiding nature had become a universal favourite. It is especially the labourer's bird, equally at home in the garden, lane or woods, and is his constant companion everywhere. Like him a very early riser, and ever ready to encourage and sustain him by his song; quick to pick up a worm or grub that he has disturbed, and to share a crumb from his frugal meal. Long after the sun has set the Robin cheers him with his song - expression of hope and rest - which increases that bond of sympathy which exist between the son of toil and this sweet companion of his labour. The Robin pairs for life, always returning to the same place, but makes a new nest. As soon as the young of their last brood are able to care for themselves the female migrates south and passes through her autumnal moult, whilst the male remains in the breeding haunt during the winter and maintains his right to a certain domain against all intruders. All the adult birds in cases 213a and b were pets of mine, but the one in case 213b exceeded them all in attachment to me. Fortunately it had a fairly long life before 1909 when I placed a silver ring on its leg, it remained with me till 1914, ere an accident befell it in the adjoining garden'