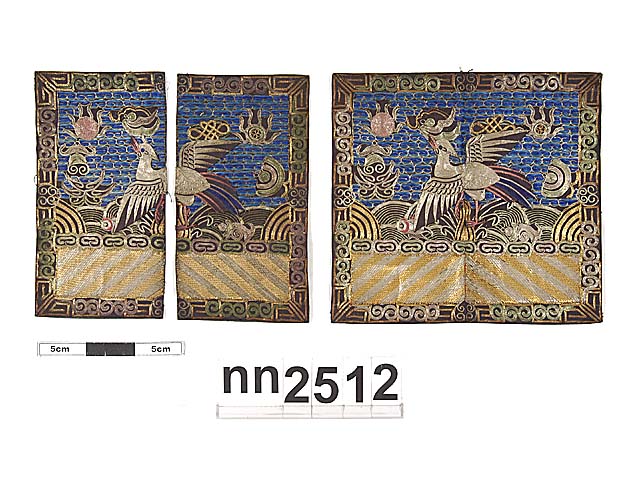 Two square rank badges for sewing onto a mandarin's surcoat. The front rank badge is split into two equal halves for either side of the coat's central opening, while the back badge is complete. They are made with couched embroidery on brown satin ground. Each badge is embroidered with a silver pheasant representing the fifth rank for a civil official, worked largely in silver-coloured metal-wrapped thread on a separate fabric, then applied to the ground. The bird is depicted looking upwards towards a red sun at the top left hand corner; standing on a rock rising above sea waves; and surrounded by rows of ruyi-shaped clouds that are worked in tones of blue silk and outlined in silver-coloured thread. The Eight Buddhist Emblems are embroidered in a circle around the bird, both the fish and conch shell shown in the waves, while the lotus, canopy, umbrella, endless knot, wheel and vase are placed in the sky. The 'lishui', standing water, pattern on the bottom is depicted by couched gold and silver threads in confronting slanting lines. This rank badge has a thick border with alternating scrolling foliage and fret pattern. The textile is lined with a tabby woven blue silk.