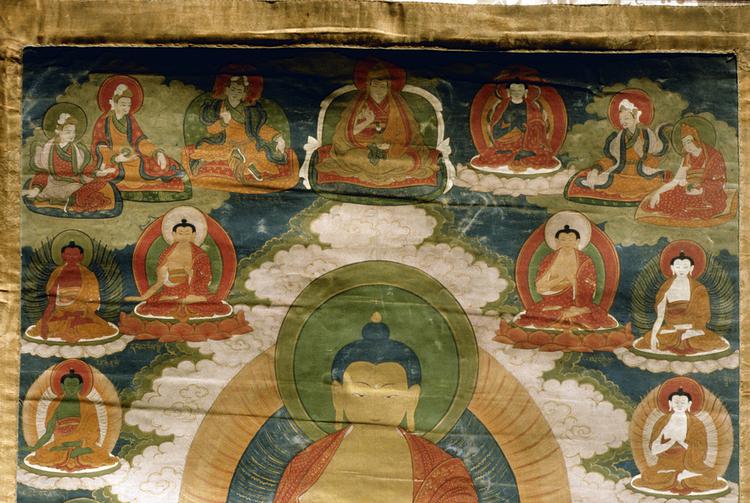 This thangka depicts Shakyamuni Buddha seated on a lotus throne. Surrounding him are several figures including a Lama with attributes similar to those associated with Panchen Losang Yeshe Paldan, Bhaishajyaguru and Manjushri. The extent of the inscriptions and drawing on its reverse makes this thangka unique in the Horniman’s collection. For a thangka to be effective it first must be consecrated. Typically this involves inscribing the reverse of the painting with the mantra OM AH HUNG, or Body, Speech, Mind. These syllables are written on the thangka by a Rinpoche -a reincarnated Buddha, returned to help others reach enlightenment- or a high lama. The location of the syllables corresponds to the deity depicted on the thangka: body is marked on the other side of the canvas to the forehead, speech, the throat and mind, the heart. Through this process of consecration (or rapney in Tibetan) the image on the thangka becomes the deity it depicts. In this case all the figures on the thangka have been consecrated with OM AH HUNG inscriptions. Unusually there is also a stupa (or chorten in Tibetan) on the reverse, each section of which contains Sanskrit verse written in phoneticised Tibetan. One section of the chorten also contains an inscription in Tibetan which translates as follows, “"In the river bank of limitless sand in the east, Unconquerable Glory of the pure Buddha field , the Bhagavat or Buddha, surrounded by countless Bodhisattvas, the Glorious Mtshan-legs-yongs-gragsdpal [one of eight medicine Buddhas]...." The sections that make up chorten have manifold meanings. Writing prayers in these sections imbues those prayers with special significance. It is likely therefore that this thangka was created with specific purposes in mind, but we are currently unclear as to what they would have been.