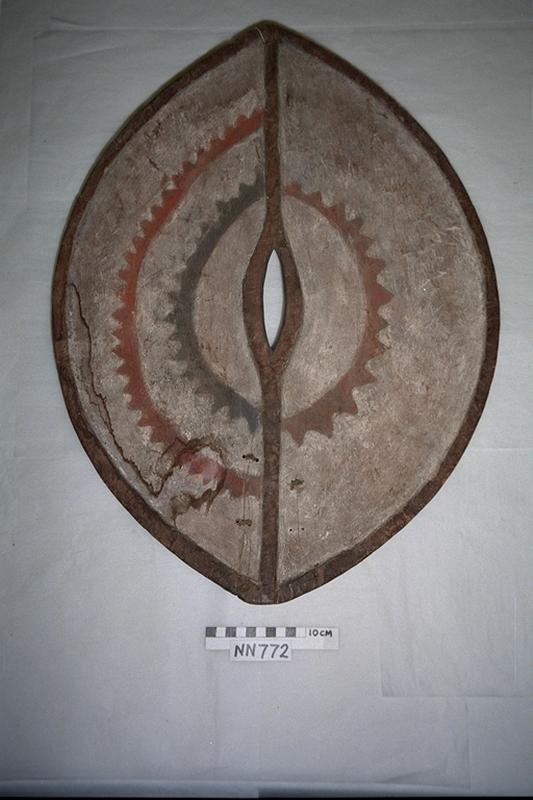 Elliptic leaf-shaped shield made of wood, with a narrow hole in the centre. It is painted with three serrated lines of triangles, which follow the curves of the shield, two on the right and one on the left. On the reverse, it has a cylindrical arm hole, and is carved with triangular designs.

Community Commentary by Njeri Gachihi within research project: 'Rethinking Relationships and Building Trust Around African Collections' 2021: Ndoome is a Gĩkũyũ name referring to a leaf-shaped wooden object that has a very similar shape with a traditional African shield. It is often decorated with zigzag incised patterns, red, white, black (dark blue) and sometimes blue pigments. This particular artifact is a ceremonial object, known to have been used by boys who were preparing for initiation among the Agĩkũyũ people of Central Kenya. They were made by the initiates themselves although some are believed to have been made by specific skilled craftsmen who made the objects for use during the initiation season. On the reverse, ndoome is decorated with carved zigzag designs also painted in red ochre, blue and white and has an arm grip carved from solid wood, used to fasten it on the upper arm (biceps) during the dances. The pattern and colouration symbolizes the trinity and acts as the community’s badge or flag identifying them as a cultural group. [The brown symbolizes the colour of their surrounding- soil (femininity /fertility) and also the colour of the skins and hides that were used as clothing by the community. The white colour often represented by cowrie shells and white ochre represents the community’s union with their maker whom they believed lived on top snowcapped Mt. Kenya. Blue stands for the sky (masculinity/cover)]. The meanings of the pattern embedded on each ndoome is said to have been a secret only shared among members of that particular age group. Since this was an important part of the initiation ceremonies of the Agĩkũyũ people, the absence of the object must bring with it serious implications. Ongoing revival has seen the young men trying to recreate this object through oral narratives but the results were have not successful. N.B.This artifact is certainly not a weapon, as classified in the catalogue, but a ceremonial/ritualistic object used as part of the traditional circumcision costume Made from light wood sourced from Muninga (Pterocarpus angolensis); mukungugu (Commiphora eminii). Although some boys preferred to carve their own, ndoome was usually carved by special craftsmen, who exchanged them for goatskins or other goods. It is specifically used for Muumburo dance and boys of each territorial unit had their ndoome decorated the same way each year. The design or pattern on the outer side of the object was agreed upon many months in advance and the same pattern was to be adopted for the same age groups fighting shield later in life. After graduating, ndoome was not thrown away but was passed on to a younger brother who was himself preparing to be initiated. These brothers scrapped off the old decoration and repainted it with the new design adopted by their group. New ndoome were only acquired if there were several boys preparing for initiation at once and not enough ndoome to go round.