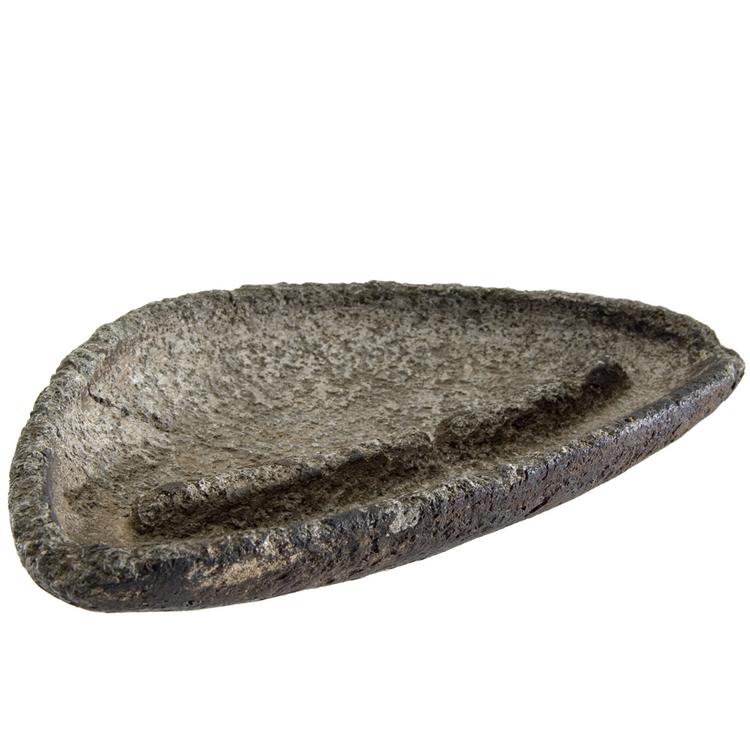 This object is known in the Inuit language as a kudlik, which broadly translates as lamp. Painstakingly carved with stone tools, and later metal tools, from blocks of soft soapstone found in the Eastern Canadian Arctic, they were traded widely among the semi-nomadic Inuit communities of the Arctic. A half-hemisphere forming a shallow dish with a lip, the kudlik was kept in a house or campsite, and likely would not have been carried year round as it was too heavy for long journeys.

In the house the lamp would be filled with a measure of oil rendered from animal fat, into which a wick made of dried moss could be inserted. The wick would soak up the oil and could be lit, generating light and heat; this was particularly important for drying clothes at the end of long journeys. The difference between wet and dry clothes can mean the difference between life and death in such a cold climate. The Inuit had an array of vessels made from soapstone, including larger kettles which could be heated over open fires to boil stews. European influence gradually replaced these time-consuming to make, heavy vessels with copper and, later, aluminium kettles and pans. Many were collected in the early twentieth century by traders and travellers. This one was collected by Mr. Woodward.

Inuit is used as a name for indigenous peoples who live within the arctic circle and were previously called Eskimos. The term Eskimo was not chosen by the Inuit themselves most of whom now prefer to be known as Inuit, but there is still no total agreement on their name. Inuits live in Canada, Alaska and Greenland and so have different nationalities. Although they share a common culture few of them now live a completely traditional lifestyle. In the past they were living in very isolated places and so they had to be totally self sufficient, relying on land and sea animals, driftwood and soapstone to provide all their needs. When an animal was killed every part of it was used: the flesh was eaten, the fat or blubber used for burning in lamps, the bones used to make sewing needles, its sinew was used for thread and its skin used to make blankets, clothing and footwear. Walrus ivory was particularly important to make knives. At the coldest time of year Inuits wore two layers of clothing.The inside layer was worn with the fur against their skin and the outer layer with the fur on the outside, this also included their boots and mittens. Outer layers would be taken off when inside and heat was provided by Kudliks. Both men and women wore Parka (anorak) jackets made from animal skin but the woman's jacket called 'Amouti' was longer, with flaps at the front and back to help when kneeling or sitting to prepare food. The woman's jacket also differed from the man's because it had a larger hood to protect the baby, carried on her back, against the cold wind. Boots, called Kamik, were made from dressed skin which means that all the fur had been scraped off.