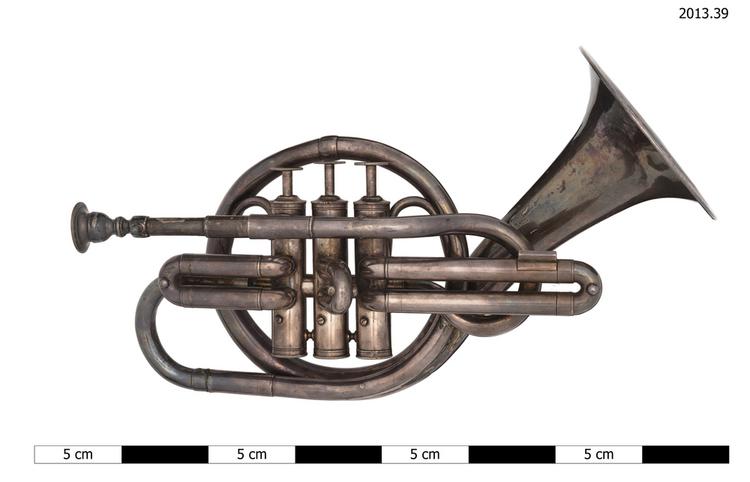 Circular cornet a pistons, probably in B-flat, of silver plated brass by Carl Boosé, London, circa 1857. The bell stamped 'PATENT/C BOOSE/ 28 HOLLES ST/LONDON/4542'. Three early bottom-sprung Périnet valves. There is solder repair to the join between the bell and body tubing, and slight denting to bell edge. With mouthpiece. stamped 'F. BESSON/ LONDON' and '3' and a shank.

The cornet belonged Edward James Russell (born circa 1905 died around 1968) who was bought it as a boy, second-hand, by his father. He lived in Letchworth Garden City, and played this cornet in Letchworth Garden City town band (in the 1920s) every Sunday. He was a plasterer, and latterly the manager of the Gloucester Arms pub in Nightingale Road, Hitchin in Hertfordshire. This instrument is a rare example of a cornet by Carl Boosé (1815-1858), who was employed by Boosey as a band music editor and wind instrument tester. T. Boosey & Co. were advertised as ‘agents for his military band instruments’. The Périnet valves on this instrument are a rare early type.