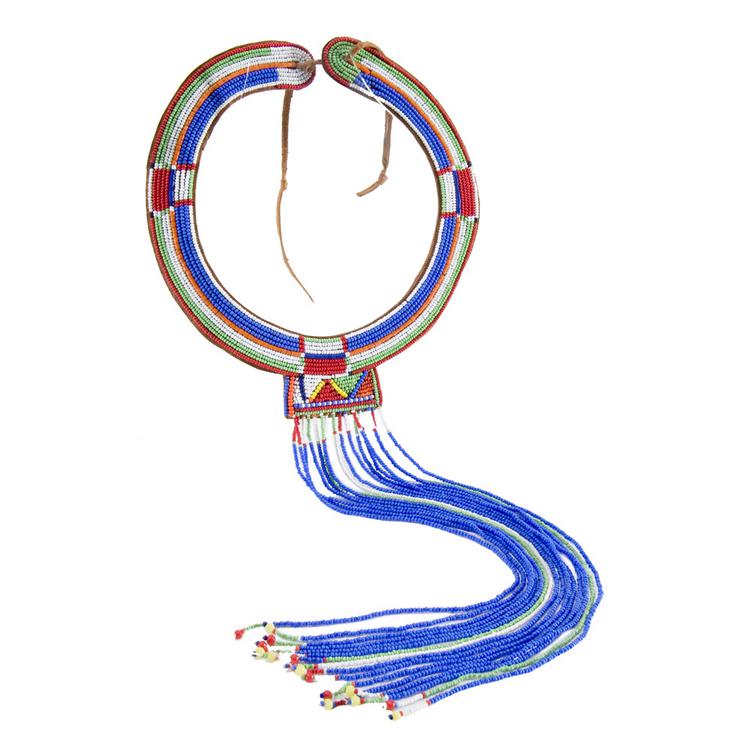 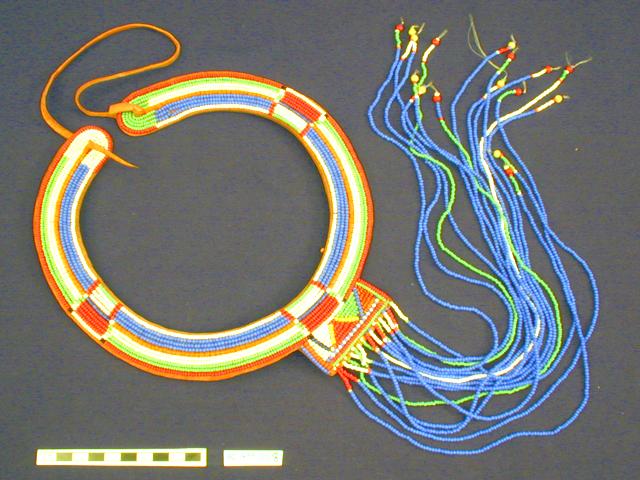 Maasai neck ring, 'meringet' made from leather decorated with blue, red, green and orange beads, with a long multicoloured beaded front piece. Bought MEM from the African Centre for the Education Centre in 1980.

Manufacture continued:
Bead work is common throughout East and Southern Africa and the style varies from one culture to another. It is usually carried out by women, perhaps because their smaller hands are more nimble for the delicate work. However, it is a relatively modern practice since beads first arrived in Africa as items of trade. Introduced by Arab traders sailing down the east coast, beads were exchanged for Ivory and other precious things. This is an indication of how highly they were prized. The earliest Maasai beaded jewellery was made from large red beads manufactured in Holland and dates from around 1850. Although Venetian glass beads were also imported, the major influence on bead work in the region came from the importation of less expensive tiny, coloured glass beads from Czechoslovakia about 100 years ago. These beads had pre-drilled centre holes so they could be easily strung on thread and came in a wide variety of colours. The peoples of East and Southern Africa used these colours to reflect their traditional beliefs and legends. Before the arrival of beads coloured natural materials such as seeds were already being used to reflect beliefs. Early East African peoples seemed to have favoured the colours black, red and white. Perhaps this was linked to the Maasai legend of the two gods, one black and the other red, who represented good and evil. (See connected stories).
Maasai beadwork uses small blocks of colour divided by bands of contrasting colour. The use of highly contrasting colours is considered to be very pleasing to the eye. Maasai Primary colours are; white, red, green, blue, and orange. Other colours such as yellow or black are Secondary colours. If a certain Primary colour is unavailable then it may be substituted by a Secondary colour, for example blue may be used to replace black, but this is considered to devalue a piece of work.

Community Commentary by Emodo Janet Idekure within research project: 'Rethinking Relationships and Building Trust around African Collections' 2021 A necklace made of leather at the neck areas and beads at the lower parts The object was used and Currently still used in wedding ceremonies of the Maasai people . There were a number of different colours used in Maasai beadwork ,red signified blood,bravery,and unity,white represented health peace and purity,blue represented sky and energy whereas green represented the grass colour and signified land production. A woman getting married wore a long necklace with blue beads and a very elaborate and heavily neck piece. Those with higher social status wore more colourful beads. It was made by the mother of the bride ,the bridegroom's mother or aunties had to pay the bride's mother a bull so that they could make the necklace for the ceremony. It was also worn by the single ladies when they were going for the dances for the purpose of enhancing their beauty. Colours and it's significance: Beaded ornaments represented Maasai's cultural values and traditions. Bead was worn according to the age and social status of an individual. The museum can retain the object as world's cultural collection for researchers and for tourism purposes. This is because the object is not extinct in the community ,it's still been made but modified in a modern way.